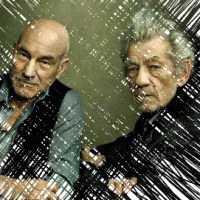 If you're looking to cast a play about a pair of septuagenarian eccentrics you can't really go much starrier than the original theatrical bromance of Patrick Stewart and Ian McKellen. Sean Mathias' production of No Man's Land originated on Broadway where it played in repertory with the same team's Waiting for Godot, but it's taken its time coming back to the West End (via a short national tour.) Not that Harold Pinter is ever exactly an open book, but No Man's Land has a reputation for being particularly impenetrable: Hirst (SirPatStew) is a writer, a successful one with a large Hampstead house and a couple of assistants, but also a reclusive one who doesn't venture out much further than the pub. It's on the way back through Hampstead Heath one night that he encounters the much shabbier poet Spooner (Serena,) and invites him back to his drawing room to continue drinking into the night.

Their friendly, rambling conversation turns darker when Hirst crawls out of the room to be replaced by Foster (Damien Molony) and later Briggs (Owen Teale,) who want to know what Spooner is doing there. 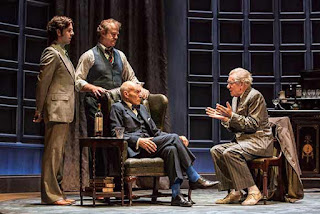 The two younger men are Hirst's assistants, although whether he actually ever hired them or they imposed themselves on his household is one of the many things left deliberately vague. One thing that's clear is that like in much of Pinter's work there's a power struggle going on here; predominantly between Spooner, who wants Hirst to rejoin the world and meet his readers, and the two assistants who want to keep him to themselves. 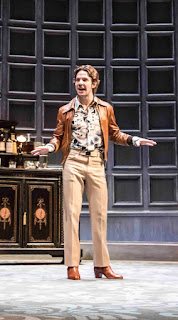 Stephen Brimson Lewis' set design is a circular room that's got a suitably purgatorial feel - there's a window, but the curtains only get pulled briefly before the sunlight gets blocked out again - but the costume design, especially for Foster and Briggs, sets the action firmly in the mid-'70s when the play premiered, losing some of the feel of this being a limbo state. And all that beige isn't Damien Molony's best look. I mean, obviously not, because this is:

Needless to say Serena and SirPatStew remain immensely watchable performers, their chemistry together only adding to the experience. The play's strongest moment for me came when a confused Hirst returns to the room the next morning to find a locked-in Spooner and, mistaking him for a long-lost friend from his past, starts to reminisce about unfamiliar names. Spooner eventually decides to play along, but as the discussion turns aggressive and competitive, the actors start to sow doubt as to whether Spooner is in fact a figure from Hirst's past rather than someone he just met the previous night. 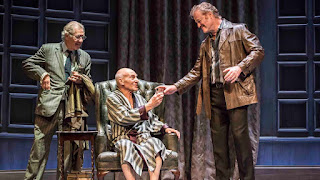 But that aside Mathias' production was disappointing for me: Pinter is full of dark humour and while the humour is mined, the darkness isn't, leaving the evening feeling rather flat. There's also no sense of homoerotic tension around Foster and Briggs, which means some lines come out of nowhere. It all leaves the show baffling in a frustrating rather than intriguing way, with the enduring impression that a lot of nuance has been missed.

No Man's Land by Harold Pinter is booking until the 17th of December at Wyndhams Theatre.

Air conditioning status: Front of house is baking but the auditorium is nicely cool; the aircon may have been turned off during the actual performance though as it did seem to get warmer.