Theatre review: Things I Know to be True 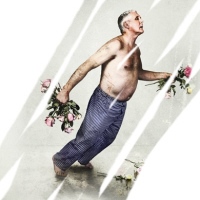 Frantic Assembly use their signature physical style on an unlikely genre, the family melodrama, for Australian playwright Andrew Bovell's Things I Know to be True. The title refers to a mental list kept by Rosie Price (Kirsty Oswald,) a young woman on her gap year in Europe, who gets fucked in more ways than one by a handsome Italian and, heartbroken, makes an early return to suburban Adelaide and her parents Fran (Imogen Stubbs) and Bob (Ewan Stewart.) The baby of the family, Rosie's list is of comforting things about her family and how she'll always know where she stands with them, so of course she's barely back before it all starts to change. Eldest brother Mark (Matthew Barker) has been dumped by his long-term girlfriend due to a crisis he's not yet shared with the others, while Ben's (Richard Mylan) big-spending lifestyle is clearly leading to trouble.

But it's her sister Pip (Natalie Casey) who's first to rock the boat, revealing that she's leaving her husband and children and moving to Vancouver for a year-long job - and to continue an affair with a man she met at a conference. 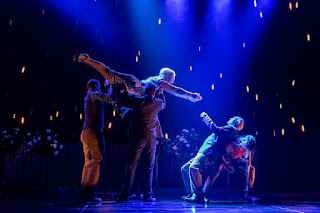 It seems Fran has always had a particularly abrasive relationship with her older daughter, bordering on open dislike, which is the first indication that, far from the perfect family Rosie thinks she has, they're a particularly hard bunch to like. Fran and Bob have indeed worked hard all their lives to provide for their kids, but with that has come a sense of wanting them to turn out in very specific ways, and they react with fury at each child's problem. Directors Geordie Brookman and Scott Graham have kept the Australian setting but let each of the British actors use their own accent; I thought this might be for universality but it could just as well be to stop the audience noticing that they're watching an episode of Neighbours. 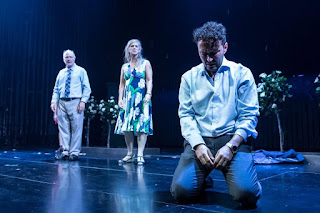 Except even Neighbours wouldn't spaff quite as many storylines onto a single family in such a short space of time, and while the play remains watchable, the amount of non-stop drama piled on does start to border on the comical, except played deadly serious - when, late in the day, Rosie's parentage starts to be called into question, it's really a soapy step too far. Ian and I disagreed on Bovell's writing: He thought that while the story was over-the-top the dialogue made it work, while I grew frustrated with the way it fell back on the parents reacting to everything with a screaming fit of rage to keep the drama at a level of hysteria. 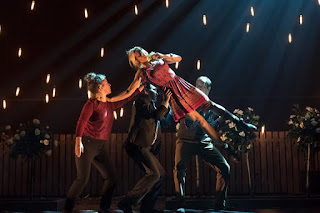 What we didn't disagree on was that the standard of the acting and production elevated the problematic story. Even if the fact that two directors had a hand in it was obvious - the movement sequences don't flow as naturally as in other Frantic Assembly shows - there is a lyrical touch to the balletic staging, and the light and shadows in Geoff Cobham's set and lighting design deliver this mix of a misty-eyed idealised family with harsh reality breaking in. There's strong performances from everyone, notably Oswald's wide-eyed innocent and Barker's introvert, and it's good to see Casey, recently very funny but somewhat typecast in broad roles, convincingly play something a lot more grounded. And once again school parties, which always seem to make up the vast majority of their audience, prove a much better crowd at the Lyric than almost anywhere else - utterly absorbed by both story and staging.

Things I Know to be True by Andrew Bovell is booking until the 1st of October at the Lyric Hammersmith; then continuing on tour to Oxford, Warwick, Liverpool, Salford Quays and Chichester.