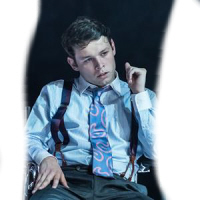 Playwright Beth Steel seems to like titles reminiscent of kids' classics: Much as her Wonderland featured miners at the bottom of the tunnel rather than a white rabbit, her Labyrinth offers up bankers instead of David Bowie and muppets. In fact the reference that most often came to mind was Lucy Prebble's ENRON, as Labyrinth too aims to illustrate more recent financial collapse through the story of a historical one - in this case the late 1970s / early 1980s mountain of debt that crippled South America. Hampstead Theatre have brought back their recent discover Sean Delaney and put a whole show on his shoulders as John, son of a fraudster and determined to make a fortune in a more reputable way himself. He's taken on by a bank that specialises in making loans to foreign governments, and learns from Alpha male Charlie (Tom Weston-Jones) how the world is run on behind-the-scenes handshake deals.

John starts as the voice of conscience, uncomfortable with the fact that his job essentially amounts to making overly optimistic risk-assessment reports to justify deals that were always going to be done anyway. 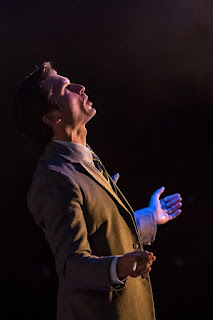 It is, of course, a policy that happens to implicate John if and when everything goes tits up, but by that time he's been thoroughly sucked into the adrenaline of million-dollar deals in which loans pay for other loans, confidently given out on the basis that a whole country can't go bankrupt. Labyrinth runs on energy, surprisingly low on light moments except when we occasionally see conversations between Eric Kofi Abrefa and Matt Whitchurch, as co-workers of John and Charlie's who are actually attempting to have lives outside of their jobs. 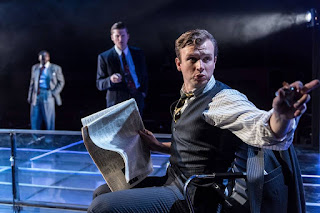 The comparisons to ENRON keep coming in Anna Ledwich's production, whose traverse set (from Andrew D Edwards) is surrounded by neon mazes, the action sometimes interrupted by surreal movement sequences, actors wearing seal and penguin masks rather than velociraptors. To be honest it's an influence Ledwich would have done better to play down rather than embrace so much, as it not only feels derivative but comes off the worse in comparison. The dance/fantasy sequences in particular feel tacked on and out of place with the rest of the play, despite a subplot that sees John's father (Philip Bird) return from prison, which puts a question mark over John's mental state even before he develops a massive coke habit. 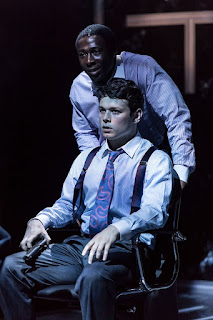 In fact like much of the work on character, this look at John's fracturing mental state is underdeveloped, and while Delaney has the charisma to keep us interested for the two and a half hours, he doesn't quite have the experience to wring out personality from something of a generic character (but his terrible gakked-up '80s dancing is kinda hot, don't @ me.) Overall Steel is stronger on concisely telling the story of a forgotten - it suits the system for it to be forgotten, so business can carry on as usual - financial crash. Labyrinth is often effectively thriller-like, but doesn't quite pull off the human element.

Labyrinth by Beth Steel is booking until the 8th of October at Hampstead Theatre.