Theatre review: Much Ado About Nothing (The Faction / Selfridges reFASHIONed Theatre) 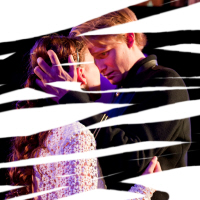 Alongside the theatres that have been marking the 4th centenary of Shakespeare's death, there's been various other tributes from the obvious, like commemorative coins, to the less likely, like Selfridges (they sell fridges) theming their window displays around quotes from the plays. Taking the idea full-circle, the department store has also decided to actually stage one of them on-site, in a pop-up venue in the Oxford Street shop's basement. They're calling it the reFASHIONed Theatre, and handing out glossy programme/brochures PRINTED SINGLE-SIDED ON THICK PAPER HOW MANY TREES HAD TO DIE that remind us of the many high-fashion brands you can buy in-store (they also sell fridges) so the fact that this is largely a marketing stunt would normally have kept me away.

But they've actually enlisted fringe stalwarts The Faction to produce their Much Ado About Nothing, and despite their last couple of years' output being largely sub-par, the company has enough good work under its belt to keep me checking them out. And this time around Mark Leipacher and Rachel Valentine Smith (jointly directing) show they can still do the business when they want to. 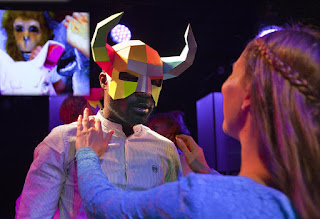 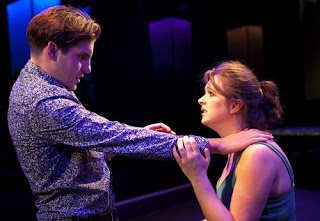 The temporary theatre is set up in traverse, or perhaps more accurately like a catwalk, in a production with much newer and cleaner costumes than the fringe can usually manage. With the design more focused on the clothes than the set, the bareness of the stage does make things tricky sometimes, particularly in the two gulling scenes of Beatrice and Benedick - each involves two sets of characters pretending they haven't seen the other, and with few places to actually hide it does make the scenes feel a bit forced in where they find their slapstick. They largely get away with it on the leads' charm alone - we're in safe hands with O'Donnell from the start, she's an actress I've always instantly warmed to in any production I've seen her in, and she gets the audience on-side quickly with the comedy, while also really selling the darker drama near the end. Boyd takes longer to relax into the role - there's far too much wild gesturing and mugging in the first half-hour - but eventually the wicked spark in his eyes gets us on-side too. 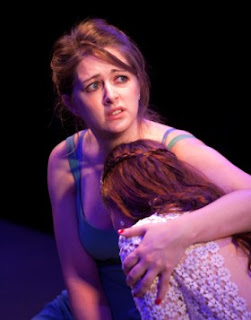 In Leipacher's Hamlet a couple of years ago, the cast interacted with a pre-recorded Simon Russell Beale as the Ghost, and this way of sneaking in a celebrity cameo has been expanded here with a trio of uncredited appearances on the TV screens around the stage. So the various bits of news delivered over the course of the play come from a video of Meera Syal as a TV news reporter, conveniently masking any mismatch between the live and pre-recorded dialogue (of which there isn't much, the cast have done a great job with their timing) by suggesting a satellite link delay as she touches her ear to deliver the latest news, in the way someone might announce something shocking like "this just in, Selfridges don't actually sell fridges." Later Simon Callow and Rufus Hound pop up as if on security camera as Dogberry and Verges, which doesn't work quite as well but at least means this sometimes dodgy subplot gets cuts down a lot (and while I've never warmed to Callow, at least he correctly plays Dogberry straightforwardly as amiably pompous, something many actors seem inexplicably unable to do without throwing in farts and whistles.) 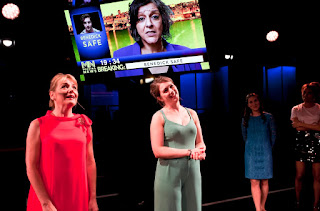 And after a few Shakespeares where the Faction have gone for a bloated approach, we're back to a much more fringe-like, urgent production with a lot of cuts and a running time under two hours without an interval. It means not every interesting idea gets fully explored: Don John (Christopher Hughes, the only Faction Core Ensemble member in the production*) starts off more socially awkward than outright villainous, and there's a moment when he first hears of Claudio's impending marriage where he seems about to cry, suggesting his anger comes from unrequited love for him; sadly it's not something the production has time to properly come back to and explore. 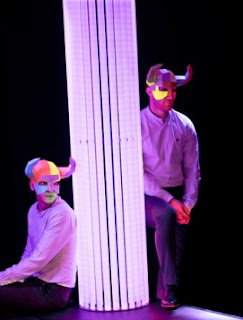 With a small cast who for the most part don't double up, instead giving some characters extra lines, Izzard's Hero gets a chance to have a bit more personality than usual. Of course putting Margaret (Tala Gouveia) more to the foreground does always make it even more obvious that at the climax she doesn't say something like "hang on, Borachio (Jamie Maclachlan, giving some nice variety between this role and his other one as a slightly camp Friar Francis,) asked me to dress up like Hero when he shagged me in the window last night, could that in any way be relevant?" Then again Gouveia plays Margaret as strangely angry, so maybe she's pissed off with her boss and deliberately keeping schtum. 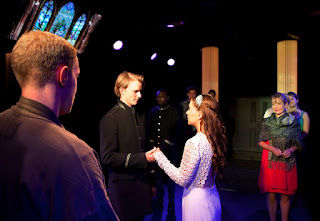 Gender-flipping Leonato is a good way of upping the female cast quotient as it makes the story one of an all-male party arriving and causing chaos in an all-female household; it does make Leonata mistrusting and turning on Hero even more brutal when she's her mother though. As for the many problematic elements of the play, I've only seen one actor (Philip Cumbus at the Globe) actually make Claudio make some kind of sense, but at least Lister Smith looks so young and plays him as so awkward that you can kind of see why he would have no idea how to react to the situation. And despite a bit of a frosty start the audience soon warmed up and there were laughs - perhaps the truncated running time means it's not the most finessed Much Ado ever, but I'll take that over a self-indulgently long production any day, and it's good to see The Faction get some of their energy and mojo back. Although it does mean I have to have a little lie down now after that shocking news about the fridges.

Much Ado About Nothing by William Shakespeare is booking until the 24th of September at Selfridges' reFASHIONed Theatre.

*yes, Kate Sawyer's missed a Faction show, I think I can hear the Cloister Bell ringing
Posted by nick730 at 22:37