Theatre review: Diary of a Madman 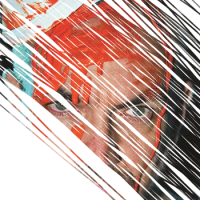 A loose adaptation from Gogol, Diary of a Madman does deal with mental illness, but it doesn’t do so explicitly for its first hour, instead setting a detailed scene. Al Smith’s Scottish transposition takes inspiration from the popular metaphor of the Forth Bridge, said to take so long to paint that by the time it’s done the other end needs starting again. Here it becomes the job of a single family who’ve been doing it for generations, Pop Sheeran (Liam Brennan) taking a year to put on each new coat before going back to the start. His son’s unable to help him at the moment so the company that manages the bridge has sent along Matthew (Guy Clark,) an English post-grad at Edinburgh University, whose thesis studies the effectiveness of a new formulation of paint intended to cut down on all this work. In one of those plot-driving coincidences, Matthew then discovers that Pop’s teenage daughter Sophie (Louise McMenemy) is the girl he slept with a few weeks earlier.

Along with the job on the bridge, the Sheeran family have inherited a hereditary mental illness, and the reason Pop and Mavra’s (Deborah Arnott) son isn’t around is that he’s on a psychiatric ward. 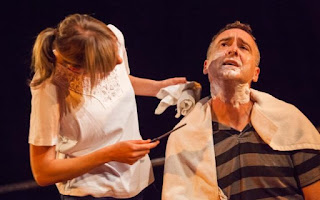 Pop himself has found drugs that control his psychotic episodes, but they also leave him impotent, meaning that he can add a crisis of masculinity to his concerns about the future of his own and his family’s jobs. With Scotland having recently gone through two dramatic referenda, it’s also a topical location to set questions of identity and history (although the pitfalls of being too topical are there to see in a Hiddleswift joke that’s already out of date.) With the interloper in his house being English and the Scottishness of the bridge itself not as clear-cut as he thought, Pop becomes obsessed with Braveheart and his illness starts to return in the form of a Greyfriars Bobby cuddly toy he thinks is talking to him. 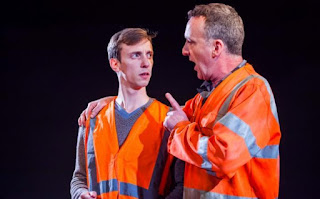 So there’s a lot swirling around in the mix in Diary of a Madman but Christopher Haydon, directing for the last time as Artistic Director of the Gate (there’s one more production to come in his season but with someone else at the wheel,) makes it work, the various strands gathering like an inevitable storm. My only major issue is with the fact that, as it’s a largely naturalistic production, it just seems implausible that the other characters – all of whom are aware of the family mental history – don’t do something much earlier when it becomes apparent that Pop is becoming a risk to himself and others. 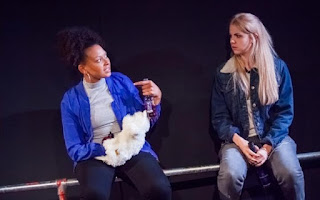 Where the play can’t be faulted is in presenting its story with a lot of humour that never seems to make light of the serious issues at the heart of it.The cast – completed by Lois Chimimba as Sophie’s indiscreet best friend Mel – give light performances that keep the show entertaining even as its central tragedy gets wound up tighter. The transposition to the present day has flaws, as it leaves us with characters who should know better than they do, but in every other respect it’s a clever linking of an existing story to recognisable, contemporary themes.

The Diary of a Madman by Al Smith after Gogol is booking until the 24th of September at the Gate Theatre.