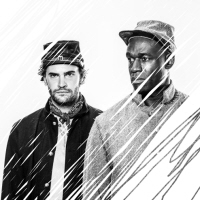 Perhaps inspired by August Wilson's Century Cycle of plays exploring the African-American experience, playwright Suzan-Lori Parks has created her own epic sequence, Father Comes Home From The Wars, that looks at the legacy of slavery in America. It's a series of nine plays following a single family down the centuries, and the Royal Court here presents Jo Bonney's original Off-Broadway production of the first three in the sequence, with a largely British cast. These three sections of the story take place during the American Civil War, and the central figure is the dubiously-named Hero (Steve Toussaint,) whose master has promised him his freedom if he serves with him in the Confederate Army. Part 1 opens as the other slaves wait for day to break, taking bets on whether Hero will decide to stay or go.

His adoptive father, The Oldest Old Man (Leo Wringer,) wants him to fight for his freedom; his girlfriend Penny (Nadine Marshall) wants him to stay with her. In fact Homer (Jimmy Akingbola,) whose foot Hero was made to cut off in punishment for Homer trying to escape, knows a secret that will decide the matter in the end. 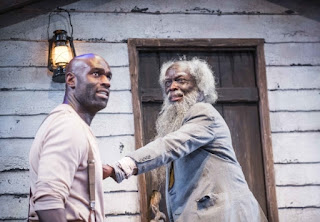 The title is a bit of a giveaway as to what happens next, and in Part 2 Hero is serving his master the Colonel (John Stahl,) who's captured a Yankee captain. When the Colonel leaves Hero alone with the prisoner, Smith (Tom Bateman) has some revelations of his own that make him consider changing sides. Parks has created a central character whom everyone seems to view as a noble, stoic figure - something of a cliché of a heroic slave - but who in fact is much more complex and harder to like: It's easy to sympathise with the fact that only ever knowing slavery has left him with a twisted and conflicted world-view; less so with the fact that his loyalty to his fellow slaves is non-existent. Toussaint is good at this flawed hero, and Stahl, reunited with his beard at last, is an odd but memorable bad guy as the amoral Colonel. 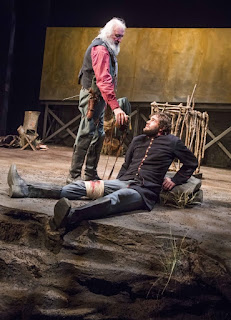 In a production that generally has a very good cast, and also Tom Bateman, Part 3 is pretty much Marshall's show, a moving performance as Penny stoically awaits Hero's return, only to have one more betrayal waiting for her. The central portion is the strongest, and probably also the one that would work best on its own, although it's also the most naturalistic - Parts 1 and 3 are Brechtian to the point of sometimes resembling music hall, with broad performances, asides to the audience and, in Part 3, a scene stealing talking dog (Dex Lee,) who's fully aware that the fact that he can talk is a bit weird. 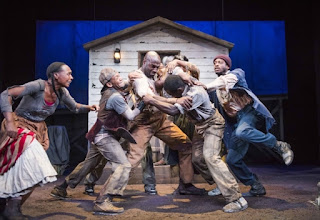 But Parks' play is somewhat throttled by its own high concept: As part of a nine-strong sequence of short plays, I was left wondering how well the three we see here would work on their own, while playing them all together makes for a long and overbaked evening. Despite the attempts at flourishes - as well as the Brechtian touches in the script we have costume designer Emilio Sosa throwing modern clothing into the mix in a hint at the story's resonance down the ages - Bonney's production is essentially a fairly static one. It's a shame because there's obvious quality in the writing, with ambiguity and complexity in the characters and some smart observations - notably a discussion about how a black man's worth actually drops when he's freed because white men no longer fear damaging someone else's property, a grim nod to the current state of affairs in the US. It's just a shame the interesting moments are spread out in what sometimes feels like a long, dry history lecture.

Father Comes Home From The Wars Parts 1, 2 & 3 is booking until the 22nd of October at the Royal Court's Jerwood Theatre Downstairs.

Running time: 3 hours 5 minutes including interval (NB the interval comes after Part 2, 1 hour and 50 minutes in, so urinate accordingly.)