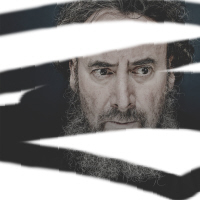 This year's installment of The Greg & Tony Show brings us to what has always been inevitable, as Antony Sher takes the title role in Shakespeare's bleak but beautiful King Lear. Gregory Doran's rule of the RSC has been criticised (largely by me, to be fair,) for sometimes resembling an extended vanity project for his husband, a criticism he's presumably not too worried about dispelling, as this is a production whose aesthetic is all about showing Lear not so much as a king but as a god. Funnily enough that meant I saw parallels with the show I saw last night, but where Haile Selassie worked into his old age to desperately try and cling on to power, Lear starts to believe the adoration he gets is his divine right, and gives up the power that is the only reason anyone respected him.

He decides to split his kingdom between his daughters, but makes the mistake of trusting the flattering Goneril (Nia Gwynne) and Regan (Kelly Williams) instead of the loyal but blunt Cordelia (Natalie Simpson,) whom he disinherits. 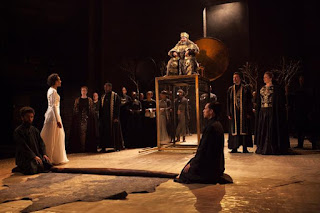 Of course Sher should know all about difficult daughters, having played Winona Ryder and Christina Ricci's mum in Mermaids. The two elder daughters soon turn on him, and while they're never going to be sympathetic characters I do like to see a production acknowledge that their problem with their father bringing his own personal army with him everywhere, ostensibly as hunting buddies but in practice able to start a violent coup if Lear had another whim, is an entirely reasonable one. Doran does this in brutal fashion by showing the soldiers border on sexual assault on Albany's female servants, because a restless army hanging around your house is never a good idea. 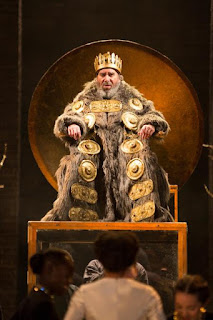 I'm yet to see a performance that convinced me that Sir Gurgle Gargle is the theatrical great he's considered to be, although I guess a voice that sounds like a drowning wookie is appropriate for the famous storm scene. The recent trend has been to play the king as a vicious dictator on the brink of madness, but Davros goes for the approach of a man who's lost touch with reality - first carried onto the stage in a Perspex litter and worshipped by courtiers dressed like high priests, he doesn't understand the consequences of coming back down to earth. He makes a credible Lear but never an emotionally draining one, and the production never feels like a classic as a result. 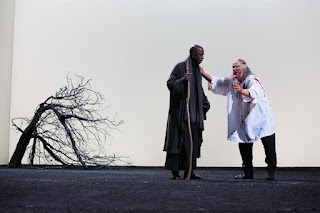 But King Lear doesn't just have one great role for an older actor, and David Troughton is a powerful Gloucester who, in contrast to Sher, does open with a less sympathetic reading of the character and allow him to reach redemption over the course of the play. There's a bit of an in-joke in the casting of his villainous son Edmund: Paapa Essiedu famously had to understudy the role halfway through a performance in the National's production; he now gets the chance to play the whole part. In contrast to his warm and funny Hamlet, his Edmund is cold and distant, a mechanical schemer rather than driven by passion. 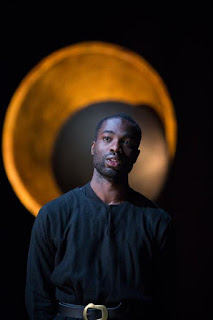 The large cast being padded out with unpaid extras a community chorus means we get various scenes of the streets filled with starving beggars, which makes Edgar's decision to disguise himself as Poor Tom make more sense as he really could get lost among them, and brings into focus the fact that while in power Lear really did cut himself off from what his people needed. Oliver Johnstone's Edgar is neither geek nor idiot as usually painted, more someone good-natured who's not really been paying attention to who his half-brother really is, and so can easily be fooled by him. 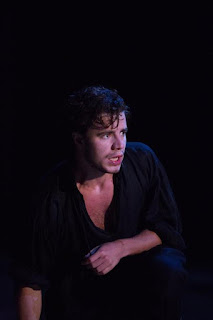 This is, nobody should be too surprised to hear, a long version of the play (two hours before the interval kicks in so time your pee breaks carefully,) and in many ways a very characteristic Doran production in that it's informed by some very intelligent reading of the text, but between the big moments there's plenty of longueurs that lack inspiration. The long first half did go quicker than I expected, but then again the train into Stratford-upon-Avon was delayed so I didn't have time for a coffee beforehand and can't swear that I didn't doze off for some of it (I'm sure I caught myself snoring at one point.) I definitely perked up for Edgar's return as Poor Tom in an interestingly bouncy loincloth; he was a bit too enthusiastically covered in mud for my liking but I guess if your job is to smear makeup on Oliver Johnstone's entire body it might be difficult to know when to stop. 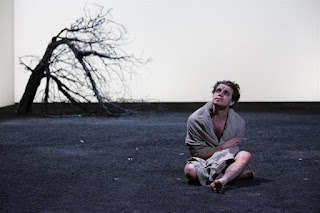 Loincloths aside, the production's biggest moments are all visual, Niki Turner's stage design seems bare but Doran uses this to build his production around a series of tableaux: The overt religious theme continues with the dramatic storm scene resembling Moses on the mountain, and Cordelia's death is a gender-reversed Pietà, while the opening procession is mirrored at the end with Lear in another litter not because he's too important to walk but because he can't. Meanwhile there's another Perspex box giving the blinding of Gloucester a particularly grisly visual, but fucking up the acoustics in the process. 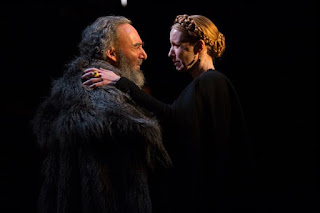 These visuals mean that this is likely to be a King Lear that sticks in my memory, but only in parts; great ideas are dotted around a production that frequently loses steam. Still, the First Lady of the RSC will no doubt get another book out of it*, and a few of Doran's trademark explorations of the text really are interesting.

King Lear by William Shakespeare is booking in repertory until the 15th of October at the Royal Shakespeare Theatre, Stratford-upon-Avon, then at the Barbican Theatre from the 10th of November to the 23rd of December.