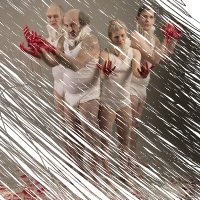 Just in case you haven't been paying attention - not just to this blog but to anything even remotely theatre-related - 2016 marks 400 years since the death of Shakespeare, and many companies (not the National) have been marking the occasion. They've mostly been doing this by staging his plays, which to be honest they do all the time anyway so it's not been altogether noticeable. Physical comedy troupe Spymonkey, though, have come up with a more fitting tribute to a morbid occasion with The Complete Deaths, which runs through the 65 deaths Shakespeare wrote (there's more than that in the canon, but for the purposes of this show only onstage deaths count) in a single evening. The framework is the classic comedy device of a company not quite on the same page, as Toby Park opens the show by announcing that after 18 years of silliness Spymonkey really need to go in a new, more serious direction and use these fictional deaths to explore dark realities.

Obviously it's a completely doomed endeavour as Aitor Basauri, Petra Massey and Stephan Kreiss all have their own ideas of how the show should go and are going to do their own thing. Basauri has been visited by the angry ghost of Sir William Shakespeare himself, who thinks the Spanish actor could be a great star of plays like If You Like This, Hey, Nonny Nonny and Kenneth Branagh. 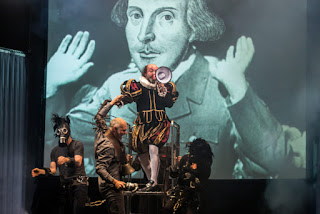 Another running joke sees Massey determined to perform Ophelia's death despite the fact that it happens offstage. But obviously all this framework is just there to give the company, in a production co-created and directed by Tim Crouch of all people, an excuse for a number of slapstick setpieces featuring ridiculous costumes (when they're even wearing anything at all,) and plenty of physical comedy. Having so many deaths to get through (there's an LED countdown and a klaxon every time another character is dispensed with,) the show is slightly too long and a couple of the sequences didn't really work for me, but the hit rate is very high. 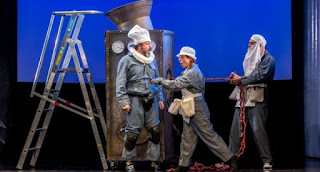 Highlights include a pretentious "performance art" section that, as so much of it does, descends into violence between Basauri and Kreiss; Othello presented as shadows on the back wall and inevitably turning into a shadow puppet show; and my favourite gag of the evening saw a huge buildup to a musical punchline involving the Flying Pickets' "Only You." Titus Andronicus sees all the characters fed into a mincer, there's wipe-clean kilts for Macbeth, and a sequence about just how bloody long it takes Antony to die in Antony and Cleopatra. Cleopatra herself is left with snakes hanging off her crotch, while Romeo and Juliet is a ridiculous second act opener. Beyond listing every gag there's not much more I can say other than, if inspired silliness is your thing, Spymonkey deliver again.

The Complete Deaths by Spymonkey and Tim Crouch is booking until the 1st of October at Shoreditch Town hall; then continuing on tour to Manchester, Warwick, Southampton, Northampton and Chicago.