Theatre review: Out There 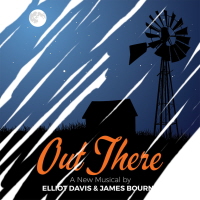 While Elliot Davis and James Bourne's first stage musical, Loserville, was unfairly maligned by the press, it's also true that it felt like it had gone too big too quickly with a West End run, and it did a lot better a couple of years later as a fringe show. So it's back to the Union Theatre (albeit in its new location across the road) and to director Michael Burgen that they return for the first outing of their sophomore effort. On the evidence so far, Davis & Bourne's niche is a British take on Americana: After the high school antics of Loserville we have the space race, dysfunctional fathers and sons, and a brash stranger finding redemption in a small town and saving it in the process, in Out There.

Newman Carter (Shane Gibb) is an astronaut about to lead a mission in 1969, when his wife dies in an accident. Unable to focus, he's demoted by NASA and ends up leaving his five-year-old son David and disappearing. 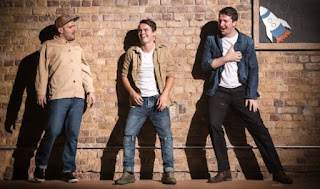 Forty years later David (Neil Moors) has his own take on the family trade, as head of a company trying to launch commercial space flights. He's got a bad relationship with his own son Logan (perky-nippled chipmunk Luke Street,) who's wanted by the police for Offences of an Unspecified Douchebag Nature. An aunt tips him off to a possible hiding place, giving him a letter to deliver to the reclusive Ned (Dave Willetts) in a remote, dying Texas town. Ned is, of course, Logan's long-lost grandfather, terminally ill but still hoping for one last trip into space. 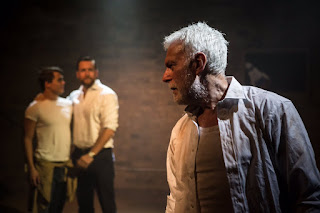 The polite way to describe the story would be as pastiche, but although there's undoubtedly an element of homage I don't think a spoof is what's going on here, I do think the writers are pretty earnest, which unfortunately doesn't help with the predictability and cheesiness. Neither the script nor the production seems to have quite realised that the "forty years later" device sets most of the action in 2009, so Logan's disbelief that love interest Jamie (Imelda Warren-Green) is a mechanic feels out of date, while why the local doctor (Gibb) is dressed as a 1950s soda jerk is anyone's guess. As with their first show, I felt Davis & Bourne could have done with a third writer to help with the book and lyrics - some of the rhymes are cringeworthy while the jokes are met by deserved silence: "You thought Sherlock Holmes was a housing development."

And yet it's hard to dislike Out There, the writers' enthusiasm is there to see at every moment, and even if the cast take their time to warm up (I know nobody brings their A-game to a matinee but you should at least be audible in a small room) they soon prove as much of an asset. Not as big a one as the music, though, which doesn't perhaps show the country influence the publicity suggests, but is full of tuneful songs that sound like instant musical theatre standards. 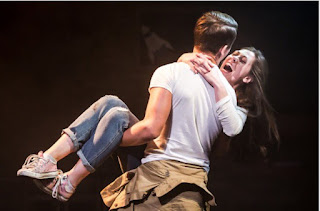 The show's various flaws are distracting in the first half - particularly Burgen's odd insistence on staging much of it with everyone sitting down, including Logan's first big number, in which he wheels himself around the stage on an office chair; even a song called "Learn To Dance" is sung entirely sitting down. But by the second act the songs are just too catchy to dismiss. Given some help with their storytelling, and perhaps if they write from experience rather than recycling their favourite movies*, I do think Davis & Bourne could be a big part of the future of musical theatre, and I'm glad to see them keeping at it.

Out There by Elliot Davis & James Bourne is booking until the 8th of October at the Union Theatre (now at Old Union Arches, 229 Union Street.)

*alternatively, go the whole hog and do a stage-to-screen adaptation - Back To The Future seems to be languishing in limbo without a creative team, this pair seem like a great match to it, and Bourne's Busted-era oeuvre leaves me confident he knows his way around a flux capacitor.
Posted by nick730 at 18:21