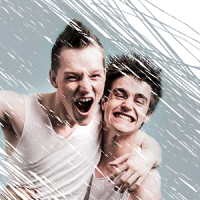 Last year Southwark Playhouse's Large Theatre hosted a hit (in fact I'm surprised and disappointed it didn't get a further life) production of Xanadu, and this year in the Little space Olivia Newton-John's title song plays on a constant loop before the start of another show largely performed on rollerskates. In theory the song's a symbol of everything this play's characters are revolting against, and a sign that we're in for a very different experience, but in fact Gregory S. Moss' punkplay might turn out to have more in common with that affable piece of '80s nostalgia than it first appears to. It's the mid 1980s in New England - Reagan's America - and Duck's (Matthew Castle) father has kicked him out of the house after an argument over military school. Duck turns up at his best friend Mickey's (Sam Perry) house asking if he can stay there for a while, which turns out to be the best part of a year during which the teenagers discover hallucinogenic cough syrup, some really bizarre porn, and punk.

After listening to an unknown record - like the props that have their description scribbled on them on white labels, the actual song that first gets them fired up is inaudible to the audience - the pair decide to embrace punk, most notably by forming a band and Mickey giving Duck a mohawk. 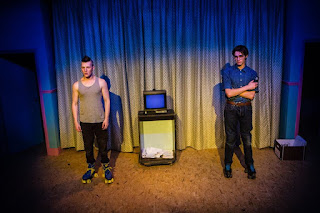 But the counter-culture they're trying to join is one that's already on its last legs, and their experimentation with it actually ends up showing us more about their relationship as Twinks On Skates punkplay is really part of a very traditional American form of storytelling, the coming of age story. In this respect the play actually follows pretty predictable lines: The boys bond, face up to bullies together and fall out over a girl (Aysha Kala,) before a jaded older punk (Jack Sunderland) finally disabuses them of the notion that they're doing anything new. The way Moss and director Tom Hughes tell that basic story is more punky than the story itself, a straightforward narrative that occasionally gets broken up by surreal dream sequences like Mickey's wet dream about a woman with the head of Ronald Reagan, or moments that take the "sub" out of the subtext, like the boys' vicious fight being interspersed with them kissing passionately. 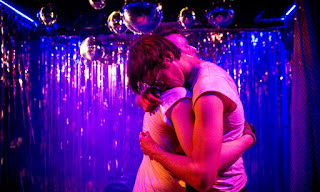 The production is well-cast, and while the characters would no doubt be appalled by the description, there's something adorable about them, because maybe the title punkplay doesn't mean a play about punks, so much as people playing at being punks. Castle's Duck is the more Alpha personality of the pair, more aggressive as he tries to take ownership of their new identity - despite the frequent assertion that punk has no rules, he has no end of criticisms of what Mickey's getting wrong about it - but holding onto a vulnerability that keeps him likeable. The gangly Perry is very funny as the awkward but ultimately more well-balanced Mickey, and Kala and Sunderland do well in their brief appearances as all the other characters. 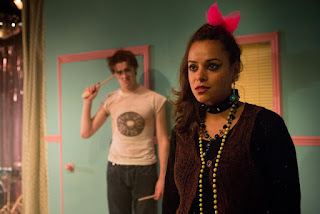 Southwark Playhouse is staging this UK premiere as its contribution to a year-long series of events marking forty years of punk, and there lies much of Duck and Mickey's problem: Part of their punk ethos is the certainty that they're living in a world that could end any day, but it actually just keeps going. Cécile Trémolières' design is a neat pastel room with a glitterball-filled stage behind it for the boys' band practice sessions; a setting perfectly in keeping with the "Xanadu" opening, and one which despite their best efforts doesn't end up any more trashed by the end of the play. 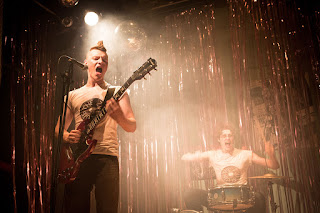 Although it's a nice surprise not to get exactly what it says on the tin, ironically I could have done with a touch more edge to Hughes' production, which possibly pushes the comic and likeable elements of the teenagers more than the disenfranchisement that leads them to seek an outlet in the first place. And I'm a bit undecided on the play's epilogue, which explains the metaphor of the rollerskates a bit too bluntly but in the process delivers a great little moment from Perry. All told though this is a pleasant surprise, an entertaining evening, some characters it's interesting to get to know, and a story that works both as coming-of-age tragicomedy, and a microcosm of how not just punk but any radical movement carries the seeds of its own ending.

punkplay by Gregory S. Moss is booking until the 1st of October at Southwark Playhouse's Little Theatre.

Air conditioning status: Not turned on, but at least it's quite short so you'll be out of there before completely dehydrating.