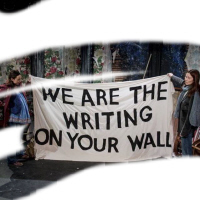 Nowadays Howard Brenton is our top writer of history plays but in the 1970s he was a more overtly political writer, and things don't get much more overt than Magnificence, which opens with a group of idealistic young protesters breaking into - what they think is - an abandoned flat. In the first sign of why the Finborough might have seen the play as ripe for revival, they're planning to squat there in protest at people being made homeless all over London while houses are left empty, as tenants get kicked out of flats they've lived in all their lives so they can be redeveloped and rented out at an inflated price. They're enthusiastic and somewhat naïve, but as the days go by the squat is watched by bailiff Slaughter (Chris Porter) - a man profiting from the situation they're campaigning against, and one with a reputation for dangerous practices.

Things take an inevitably nasty turn, leading to a number of changes to the characters, starting when pregnant Mary (Daisy Hughes) loses her baby in the raid, and her husband Jed (Joel Gillman) ends up in prison for assaulting a policeman. 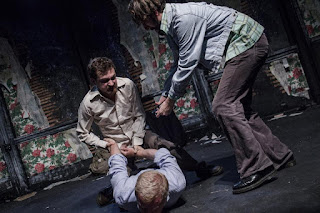 The second act sees Jed released and angrier than ever, enlisting the suggestible and now drug-addicted Will (Will Bliss) to help him take much more violent action. We're also introduced to gay Tory MP "Alice" (Tim Faulkner,) whose dying mentor "Babs" (Hayward B Morse) is concerned that he's part of an insidious new form of fascism in the Conservative Party. Jed and Alice are fated to meet in the play's climax, and the meeting is worth the wait when it comes, but Brenton has mixed results in the way he leads up to it. The opening act has a surprisingly light touch, the protesters moving into the squat almost playing out like a flatsharing comedy, with Eva-Jane Willis sympathetic as Veronica, who's seen by the other four as a bit too posh to really be dedicated to their cause. 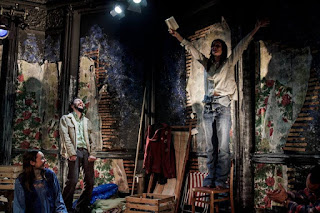 There's also an unlikely comedy interlude between Slaughter and a policeman (Faulkner,) as well as a twist that's very well-concealed by Philip Lindley's design given the intimate nature of the venue. After the interval though, the fact that this is an early work becomes more apparent as Brenton's anger is most often displayed through the characters ranting, and while the unpredictable experimentation with style continues - the naturalism gets punctuated by characters breaking the fourth wall to describe their thought process, as well as Jed getting a visit from Lenin - I'm not sure director Josh Roche handles the jumps in tone as well. At these moments Magnificence tries the patience and feels more like a period piece after the relevance it established at the start. When it does work it works well, but it's wildly uneven.

Magnificence by Howard Brenton is booking until the 19th of November at the Finborough Theatre.