Theatre review: The Intelligent Homosexual's Guide to Capitalism and Socialism with a Key to the Scriptures 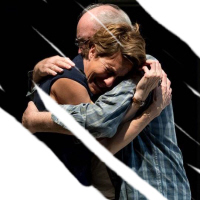 Tony Kushner's 2009 play - set two years before that - The Intelligent Homosexual's Guide to Capitalism and Socialism with a Key to the Scriptures gets its UK premiere at Hampstead, who've appended the alternate title iHo (you can't really tweet the whole thing, I guess.) But the full title is probably worth sticking to as the wordiness and sheer unnecessary length give a better indicator of what the play itself is like, as opposed to iHo, because it isn't actually about what would happen if Apple made prostitutes. Instead it's something of a family saga, though playing out over just a few days, set mainly in a Brooklyn brownstone that's in need of fairly regular repair but has still skyrocketed in value as the property boom gets going. Tom Piper's design puts the bare white shell of the four-story building on a revolve.

The Italian-American Marcantonio family have lived there for a few generations, but retired dock worker Gus (David Calder,) a lifelong communist who fought for the workers' union in the '70s, has had enough. 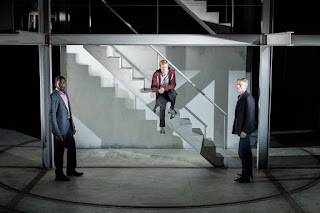 He's asked his children PL (Richard Clothier,) MT (Tamsin Greig) and V (Lex Shrapnel) round to tell them his plan to sell the house and then, having attempted once before, to commit suicide, leaving the proceeds for them to split. This sets off a lot of conflict, although a sense of betrayal and the culmination of numerous longstanding issues seem to upset the siblings more than their father's impending death. 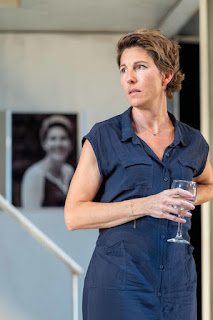 Director Michael Boyd has a luxury cast, even getting Katy Stephens in to play a character who's barely on stage five minutes, and Sara Kestelman steals a number of scenes as Gus' sister Clio, who's so open to trying out different belief systems that it's ultimately meaningless, her life including stints as a nun then a Maoist. Despite the hefty running time, though, the siblings' partners are all underdeveloped: PL has a husband (Rhashan Stone) who only ever seems to walk into a room, shout a bit then walk out again; probably becuase PL is cheating on him with rent-boy Eli (Luke Newberry,) whom he's fallen in love with (maybe he's the iHo?) MT has a wife, Maeve (Sirine Saba,) who's pregnant by V's sperm donation, but she's still sleeping with her ex-husband Adam (Daniel Flynn.) V's wife Suze (Katie Leung) is the most criminally underwritten, only there to let V off the hook when it turns out he got Maeve pregnant in a much more traditional way than they told everyone. 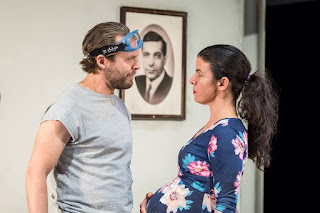 As the title suggests, Kushner intends to make points about the state of revolutionary politics through the family drama, but they're buried under histrionics. The trouble is the most epic thing about the play is the Marcantonios' egos, and having only recently finished watching the third season of Transparent with its deeply unlikeable and self-involved characters, I felt like I was back watching more of it - except I can just about handle Transparent's 25-minute episodes, and The Intelligent Homosexual's Guide to Capitalism and Socialism with a Key to the Scriptures lasts three-and-a-half hours. 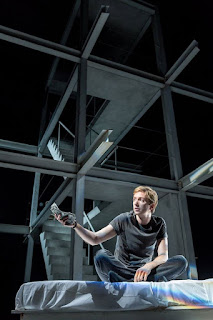 I found Sharpnel's performance too broad but everywhere else the performers manage to carry a dry piece filled with circular arguments - Greig is always watchable, here with a few impressive dramatic moments, and Newberry manages to inject a bit of heart in amongst the navel-gazing. But it's a long time to spend in the company of people you'd cross the road to avoid in real life, and though I wasn't particularly tempted to leave during one of the intervals, I was relieved when the end did - eventually and sluggishly - come round.

The Intelligent Homosexual's Guide to Capitalism and Socialism with a Key to the Scriptures by Tony Kushner is booking until the 26th of November at Hampstead Theatre.