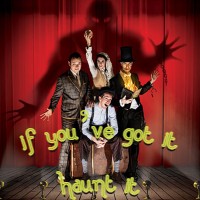 Southwark Playhouse offers up a ghost story for October, although hardly a classic Halloween chiller: Tall Stories' The Canterville Ghost, which has been touring on and off since 2018, adapts Oscar Wilde's comic short story about a ghost who meets his match when a new family move into the mansion he's been haunting for three centuries, and fail to be in the slightest bit scared of him. Instead the two children play practical jokes on the ghost until he enlists the girl's help to pass on to the other side for good. It's a very simple story, and I've grumbled at other Wilde adaptations before that if a story was likely to work on stage he'd probably have written it that way himself. But Olivia Jacobs, Toby Mitchell (writer-directors,) Jon Fiber & Andy Shaw (music and lyrics) aren't going for anything like a straightforward adaptation of the original here.
Instead the Wilde story is a hook on which to hang an evening of Victorian vaudeville as The Compere (Steve Watts) plays piano and introduces The Comedian (Matt Jopling,) The Psychic (Katie Tranter) and The Illusionist (Callum Patrick Hughes.) 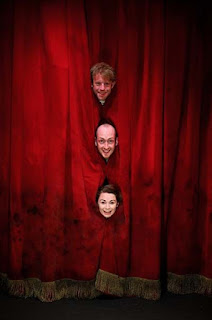 The ghost story is split up into six short scenes, with Watts as the father, Jopling and Tranter as the kids, and Hughes getting comic turns as both the exhausted ghost and the grumpy housekeeper. But in between, each of the quartet gets to perform a solo turn as a classic vaudeville act, and though there's a cheesiness to the Illusionst's tricks, and a comic chaos to the Psychic's attempts to contact spirits and read the audience's minds (there is some audience participation, and if you're in or too close to the front row you might end up on stage,) it does help take the audience's eye off the ball so they can deliver the occasional suprisingly clever trick (magic by Scott Penrose.) 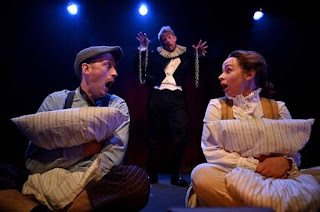 The Comedian does a ventriloquist act with the obligatory creepy, inappropriately horny dummy, and frankly Jopling's ability to keep his lips from moving is better than I've seen from ventriloquists who've made it onto TV. It's a very funny, very silly evening of old-fashioned entertainment seen through a bit of a modern prism, but when The Compere gets to do his own solo turn, his song also hints at the play winding up by connecting the framing device to the Wilde story. It takes the evening into a bit of a different direction - it never really goes for ghostly scares, but does succeed in something more atmospheric. Magic and parlour tricks on their own tend to bore me, but Tall Stories have woven them into a story that makes for a very simple, but very entertaining evening.
The Canterville Ghost by Olivia Jacobs, Toby Mitchell, Jon Fiber & Andy Shaw, based on the short story by Oscar Wilde, is booking until the 5th of November at Southwark Playhouse's Large Theatre.
Running time: 2 hours including interval.
Photo credit: Charles Flint.
Posted by nick730 at 22:31