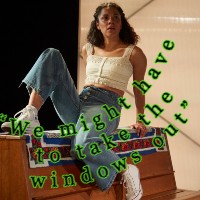 Another short writer-performer show premieres in the Bush's Studio space as Anoushka Lucas puts an Elephant in the room in a more literal way than it might first appear. Lucas plays Lylah, a young singer-songwriter who showed promise a few years ago, but whose career appears not to have taken off as well as hoped. Her story bounces around three periods, beginning with her childhood in the 1990s, growing up in a working-class London family with middle-class aspirations, who squeezed a piano into their small council flat to nurture her talent. Thanks to her French mother, she also manages to get a music scholarship to a French private school that will eventually help her get into Oxford. Her skin colour makes her an outsider and a target for bullies, but she succeeds in creating a more middle-class identity for herself even as her family move up in the world, buying and remodeling their flat.
In the story of the adult Lylah we get what may be the love of her life, with a talented session musician from a privileged background. Although there's some minor red flags in the way Leo exoticises her, the real issues will come to light when she meets his family. 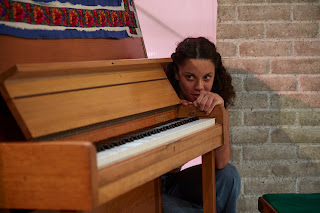 On a personal level to Lylah, presumably with some autobiographical elements, the play is about identity: With British-French-Indian-Cameroonian heritage, but little real connection to the latter two, Lylah builds her identity up around the white sides of her family, doubling down as a defence strategy after getting picked on at school. But it doesn't mean that's how everyone else sees her, and short flashbacks to the mid-2010s suggest what scuppered her music career was marketing: We hear the voices of industry executives who can't fathom selling her gentle piano songs in the Adele mould, and instead try to market her as everyone from Alicia Keys to Stormzy. 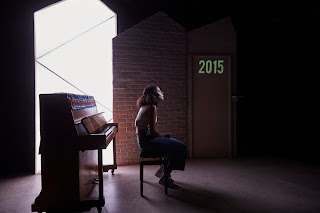 On a wider level an older piano from a time when they were still made with ivory becomes a metaphor for colonialism, and the recent attempts to bury any unromanticised discussion of what the Empire was actually built on: A beautiful object that brings joy, but at the same time consisting of parts of dead elephant transported with slave labour. 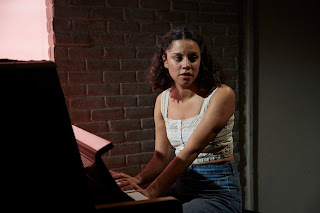 Lucas' script does eventually bring the various elements and themes of the story together, although I felt like director Jess Edwards, also credited with developing the piece, could have tried to make them all cohere a bit earlier. Despite my mentioning Adele, I could have also done with a few more of Lucas' own songs, as an appealing singer performing her own songs in an intimate space is definitely a highlight of the evening. Still, even if it takes a while for its themes to coalesce this is an interesting and heartfelt show, and if Lucas' identity as a multiracial British woman is the central question of the piece, her identity as a writer and performer already feels strong.
Elephant by Anoushka Lucas is booking until the 12th of November at the Bush Theatre's Studio.
Running time: 1 hour 5 minutes straight through.
Photo credit: Henri T.
Posted by nick730 at 22:24