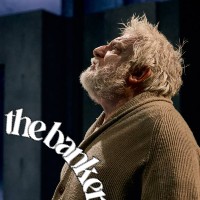 John Gabriel Borkman isn't one of the more frequently-produced Henrik Ibsen plays - I've only ever seen it once before, and then in a short, heavily rewritten, monologue adaptation. It can't be topicality that's the problem - given that the title character is a corrupt, arrogant banker, you could theoretically have a production of it playing somewhere in the world 24/7 and guarantee the famous phrase "timely revival" got chucked at it. It does, however, conform to all the stereotypes about Ibsen's work being dark, moody and bleak. JG Borkman (Simon Russell Beale,) once a financial giant, was convicted of embezzlement. He spent five years in prison and, since his release, a further eight years essentially under self-imposed house arrest. In the first act, all we know of him is the sound of him relentlessly pacing his room.
He confines himself upstairs and has occasionally attempted, but never succeeded, in leaving the house. His wife Gunhild (Clare Higgins) stays downstairs, and if you believe her they haven't spoken in all that time. She refers to him as "The Banker," he to her as "The One Downstairs." Gunhild's sister Ella (Lia Williams, cosplaying as Granny Weatherwax,) arrives one evening unexpectedly, having barely spoken to the Borkmans since the scandal broke, except to arrange for her to raise their son Erhart, who was eight at the time, and she kept him with her in the countryside until he was 15. Ella was one of the few people to escape the affair unscathed and with her fortune intact, and some of the Borkmans' assets are in her name to avoid them being confiscated. Now she's dying, and has returned to call in a favour: For Erhart to return to the country with her for the last few months of her life, and formally become her heir. 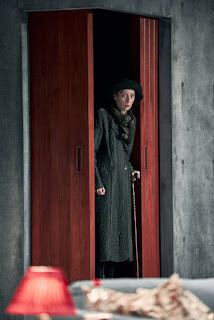 Nicholas Hytner directs a Lucinda Coxon adaptation of the play, and designer Anna Fleischle puts the action inside a cold, brutalist mansion, where we open on Gunhild coccooned on the sofa, surrounded by heaters and watching TV. It's a pretty miserable existence but not, as she and her husband would have us believe, one caused by abject poverty - they've escaped with some things, probably more than many of Borkman's victims, and it's largely the fear of being seen out and facing their shame that keeps them both inside, quietly hating each other. She still believes they can salvage their reputation; he still believes he can claw his way back into the financial world. As with Ella's hopes of a legacy, these hopes all rest on their son. 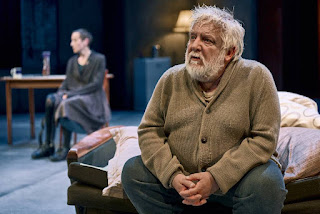 But Erhart (Sebastian De Souza) barely seems to register any of them - he's preoccupied with his relationship with older divorcée Fanny (Ony Uhiara,) and their plans to mentor talented pianist Frida (Daisy Ou.) The central trio barely seem to occupy the same reality as the supporting characters (a point costume designer Liam Bunster goes a bit overboard with in Uhiara's costume and its burst of colour among the muted tones of everyone else.) There are moments that lighten the tone - although as when Borkman casually punctures the dreams of Frida's father Vilhelm (Michael Simkins,) the one friend who's patiently stuck with him despite all he's been put through, it tends to be a bitter sense of humour. 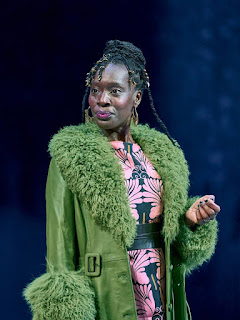 So yes, John Gabriel Borkman can feel pretty bleak and brutal, and the central characters are unlikeable, but there's an always watchable trio of great actors playing them who help elevate it. And there's other elements that stop Hytner's production from becoming too heavy-going. There's a dreamlike tinge to the brutal realism - Borkman's dreams of Norway using its natural resources may be essentially a call to cause huge environmental damage in today's terms, but it's couched in language that sounds like he's tapping into Nordic myths and fantasy. And the idea of Frida being a talented pianist is used to have the scene changes done to Ou playing Camille Saint-Saëns' Danse Macabre, that over the course of the evening is done in an increasingly discordant arrangement by Franz Lizst. 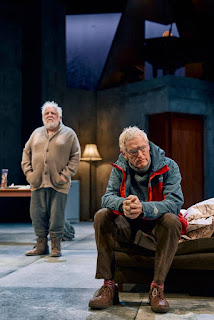 And then there's that topicality, and not just in the final act's possibility of the characters freezing to death: To me Coxon's version was less about corrupt bankers specifically, more about entitlement. They've had 13 years to think about it but Gunhild still feels no sympathy for the people whose money her husband stole, only for her own losses of money and reputation. JG, meanwhile, has spent the years pacing his study replaying the trial in his head, and always coming to the same conclusion that he's so exceptional he should be above the law. The modern-day parallels write themselves; no, these aren't likeable people to spend a couple of hours with, but there's a kind of grim satisfaction to seeing their unshakeable belief in their own superiority turn into a prison of their own making.
John Gabriel Borkman by Henrik Ibsen in a version by Lucinda Coxon is booking until the 26th of November at the Bridge Theatre.
Running time: 1 hour 45 minutes straight through.
Photo credit: Manuel Harlan.
Posted by nick730 at 17:23