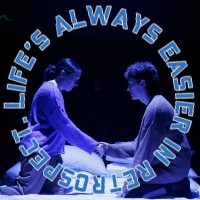 Jack Thorne wrote The Solid Life of Sugar Water for Graeae, the company giving opportunities to D/deaf and disabled artists, and has stipulated that this should be respected in any revivals - the character of Alice is explicitly stated to be Deaf, and is required to be played by an actor with a hearing impairment, like Katie Erich in the Orange Tree's production. It's not specified what disability her husband Phil has, if any at all, but Adam Fenton has Tourette's. I'm not sure if the production integrating creative captioning to make it as inclusive for the audience as it is for the company is also a contractual requirement for staging it, but both productions I've seen have done so. So it's a play that foregrounds inclusivity, but the truth is it uses this as something of a red herring: Alice's deafness is occasionally referenced to dramatic effect, but the central tragedy the couple face is a - hopefully rare - potentially universal one.
The play is essentially an extended sex scene, in which the couple describe their attempt to reconnect physically for the first time after a traumatic event. In their shared depression, they haven't showered or eaten properly for a couple of weeks, and this is more of a step towards normality they know they have to take, than the genuine throes of passion. 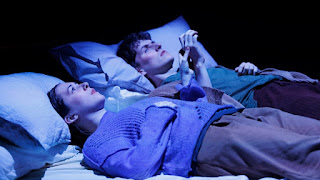 Indiana Lown-Collins' production is this year's winning JMK Prize show, and I did wonder how the requirement for creative captioning would work in the round, but of course I'd forgotten that the Orange Tree also includes an in-the-round Circle level, and it's on these four panels that Sarah Readman's video is projected. The dialogue is for the most part shown as straightforward surtitles, although occasionally Phil breaks into an obsessive list that's presented as a word cloud. We also sometimes see the beating heart lines of the couple, beating almost but not quite in sync, as well as another line that's central to the story. This is a story that flashes back to their first meet-cute, the beginning of their relationship and the event that may well have broken it. 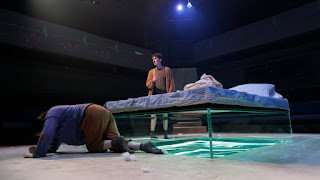 Thorne's play is full of very graphic descriptions, both of the awkward, grubby attempt at sex, and of the grisly complications to Alice's pregnancy, and Lown-Collins presents all this starkly: Ica Niemz' set simply puts the messy bed in the middle of the action, although there is also a clinically white abyss underneath it; it's left to a strong pair of actors to use the sheets as a tug-of-war metaphor for the sex scenes, jumping on top of the bed for the ecstatic moments of their relationship, circling it for the more mournful ones. At one point Erich leaves spoken language behind entirely, and has to communicate the depths of her despair through BSL only. 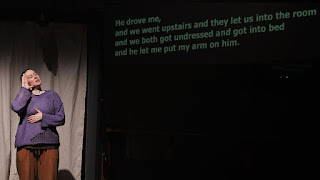 The play remains an uncomfortable watch but a powerful one, and Thorne is very particular in treating his characters as three-dimensional, including the fact that they're not necessarily likeable - especially Alice, who's a bit too quick to agree that she's out of Phil's league, and a bit too unconvincing in claiming she was joking. Erich and Fenton on the other hand give performances that draw the audience in even when their characters are off-putting, and this short, bitter play gets a new production that feels very different, but equally powerful to its premiere.
The Solid Life of Sugar Water by Jack Thorne is booking until the 12th of November at the Orange Tree Theatre.
Running time: 1 hour 15 minutes straight through.
Photo credit: Ellie Kurttz.
Posted by nick730 at 17:26