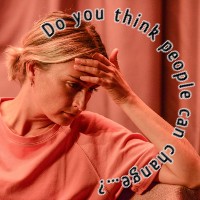 Qualified NHS therapist Georgina Burns' first fully-staged play Ravenscourt opens at Hampstead Downstairs, and though there's the odd line of clunky dialogue for the most part it goes against my usual complaint about the venue's sets being more fully developed than the scripts (although Debbie Duru's set is a nicely economical use of the space.) It's set within the NHS' Improving Access to Psychological Therapies programme, a service both lauded as a world leader in its ambition for helping the nation's mental health, and critically underfunded and oversubscribed. Ravenscourt is a psychiatric facility; the day surgery is loomed over by an institution for those with the most serious mental illnesses, and occasionally therapy sessions are interrupted by the patients next door having an attack. Lydia (Lizzy Watts) is a comparatively young therapist but she does have some years of private practice under her belt by the time she decides to join the public sector.
Because of the lack of resources, patients are referred to the service for a course of only six sessions; they may be offered group therapy or drugs after that, but otherwise it's 10 months on the waiting list for another six sessions. 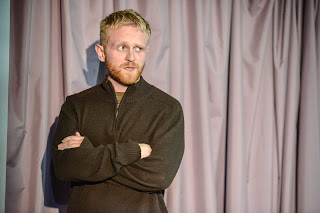 One such "revolving door" patient who's been coming back for years is Daniel (Josef Davies,) and his aggressive manner and lack of progress means all the existing therapists are loath to take him on, and he's assigned to the newbie. Lydia goes all in and seems to be getting results that her colleagues never came close to, but she may have to learn the hard way that there's a limit to what she can achieve under the circumstances. 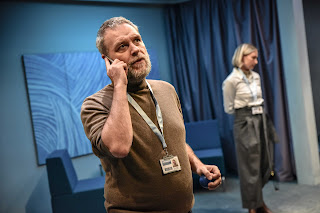 Although never a barrel of laughs there are some lighter touches to Ravenscourt, largely in the contrast between the rather worthy, health-conscious Lydia and her more earthy colleagues, compassionate manager Denise (Andrea Hall) and Arthur (Jon Foster,) whose way of talking about patients Lydia sees as unprofessional, but which may be a much-better developed coping strategy than anything she's got in her arsenal. Tessa Walker's production lets the action play out with a light touch, allowing Burns' play to make its points. 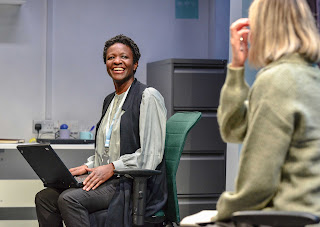 Particularly notable is Davies' performance as Daniel, which avoids all the histrionics associated with actors playing mental illness. Most of the time we have to take the experts' word for it that he's as difficult a case as they say, and like the play as a whole it's a sympathetic portrayal of the fact that mental illness doesn't necessarily present itself externally in a dramatic way, and you could walk past someone in the street without a hint of the depths they might be in. At times Ravenscourt hit a bit too close to home to me to be an entirely enjoyable experience (and I envy anyone who's so completely untouched by its themes in real life to enjoy it dispassionately) but much as there's parts of it I'd happily forget, it's a play I suspect will stay with me, put on stage with great sensitivity by everyone concerned.
Ravenscourt by Georgina Burns is booking until the 29th of October at Hampstead Theatre Downstairs.
Running time: 1 hour 35 minutes straight through.
Photo credit: Robert Day.
Posted by nick730 at 22:32