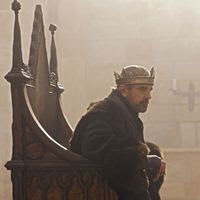 Turns out becoming King of England will really age you, but on the plus side it'll restore your hairline: Henry IV regenerates from Rory Kinnear in the first part of the BBC's Hollow Crown quartet of Shakespeare Histories, to Jeremy Irons in Henry IV Part 1. Richard Eyre takes over directing duties for the middle two plays, and brings much more washed-out colours to reflect a more sombre reign than Richard II's. Haunted by the fact that he deposed a king and could face the same fate, Henry faces rebellion from Harry Percy (known as Hotspur) egged on by his uncle Worcester. Meanwhile Henry's son Hal (Tom Hiddleston) appears to be a very unworthy heir to the throne, spending all his time with the drunken old knight Falstaff and an assortment of misfits in an Eastcheap tavern. 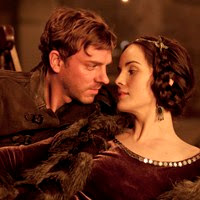 Eyre's screenplay of Shakespeare's text takes advantage of the different medium to edit and shuffle some scenes around, more directly contrasting Hal's playboy lifestyle with his father having to confront the fiery Hotspur (Big Favourite Round These Parts Joe Armstrong, playing opposite his real dad Alun as Hotspur's father Northumberland.) Armstrong's take on Hotspur is pretty literal, an easily-led hothead whose genuine love for his wife (Michelle Dockery) only occasionally peeks out through the bloodlust. Despite his Northumberland accent wandering a bit at times he makes for a charismatic antagonist, and it's a shame he's destined to be on the losing side - in this instance I'd agree with the king in wishing the two Harries swapped round. Hiddleston of course has two more films to convince me in, but he's not quite there yet: I know Hal intends all along to leave his fun times behind but I'm not sure about the very distracted air Hiddleston brings to the prince for huge chunks of the tavern scenes. It's not until he and David Dawson's Poins start picking on Francis (John Heffernan) that I even felt as if he was remotely enjoying himself. 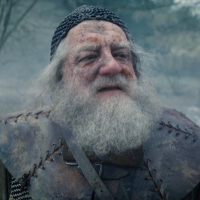 Simon Russell Beale was surely destined to play Falstaff at some point (and he's said he wants to revisit him on stage) but for now this will do as he gives a bit of gruffness to the sympathetic old villain, and manages to get some of the character's humour across - comedy in general not being this adaptation's strongest point. It's better at the politics, atmosphere and grim violence as we get to the climactic battle. As before, the supporting cast is packed with bigger names than you'd normally expect to settle for only a handful of lines: Most obviously Maxine Peake, with very little to do as Doll Tearsheet but adding to the general quality feel of the piece. Julie Walters gets to channel her inner toothless cackling hag as Mistress Quickly, while Harry Lloyd's Mortimer gets the sweet scene with the Welsh wife he's unable to communicate with - I liked Armstrong and Dockery's obvious discomfort at the fact that Lady Mortimer needs her father Glendower (Robert Pugh, also getting some funny moments in the scene where his character brags of supernatural portents of his birth) to translate her love messages to her husband. 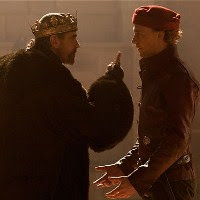 The Henry IV plays are considered among Shakespeare's greatest achievements, managing to bring together on stage so many disparate elements with great proficiency and juggle them with ease. Eyre's TV adaptation doesn't quite bring all of those elements onto the screen but those parts of the story it does focus on transfer well. It's a shame the central Falstaff/Hal relationship doesn't have great chemistry - Russell Beale seems to be projecting a warmth towards Hal that Hiddleston isn't reflecting. In fact Hal's relationship with his real onscreen father comes across as a lot warmer than with the surrogate, something that Part 1 seems much too early a point for us too see. It's decent overall - I do wish the budget could have stretched to a tiny bit of CGI snowfall though to take us to the battleground which suddenly goes white without warning. (It does however mean a nice transition later, as the battle itself turns the scene from snow-covered ground to muddy hellhole.)