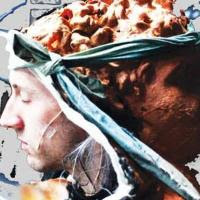 Troilus and Cressida has always been listed among Shakespeare's Problem Plays, although I doubt it's ever been quite as problematic as this. In a programme note, co-director Mark Ravenhill (a late replacement when Rupert Goold had a scheduling conflict) discusses the messy jumps in tone that saw the play labelled as such, and explains the reasoning behind this production: Instead of trying to tame the chaos, let's embrace the inconsistencies and randomness of life that the play throws at us. In the 7th year of the Trojan War, the Greek army is attempting to get its most celebrated warrior, Achilles, out of the tent he shares with friend/lover Patroclus, and back into battle. Meanwhile in besieged Troy, Prince Troilus is wooing Cressida with the help of her uncle Pandarus, not knowing that she will soon be traded to the Greeks in a hostage negotiation.

The two sides' stories are largely told separately, which is where the high concept I alluded to above comes in. This is essentially two separate productions: The Greeks are played by British actors, directed by Ravenhill on behalf of the RSC; the Trojans are played by American actors, directed by Elizabeth LeCompte for New York's Wooster Group. The two halves have their own creative teams and design concepts: Ravenhill's Greeks (designed by Laura Hopkins, who's also responsible for the overall set design) are modern-day soldiers in desert camouflage, with much of the action set around a field hospital. LeCompte's Trojans (designed by Studio Folkert de Jong) are Native Americans fighting off an invasion. 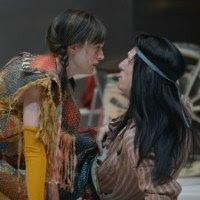 As always, I try not to read reviews in advance, but it was hard to miss the rumours abounding that the US half of this at least was a colossal dud, and people who've seen Wooster Group shows before had told me they wouldn't touch them again with a barge pole (or a lacrosse stick, as they inexplicably wield at times.) At least the advertised running time of 3 hours 35 minutes had been seriously cut down by the time we saw it, but there's certainly some bafflingly pretentious stuff going on in those Trojan teepees. Using radio mikes would appear to be a Wooster Group trademark (so much so that one appears on the poster image) but in a theatre as intimate as the Swan it seems a bit embarrassing to have to use them to be heard - actually it doesn't even work, the un-mic'd RSC actors are a lot easier to understand than the distorted mic'd actors. (In any case I hate amplified voices on a thrust stage - every voice coming from the same speaker while the actors move all over the place means your eyes and ears are constantly giving you different messages.) But what most gets in the way of clarity is that LeCompte has her Native Americans all speak in the flat Minnesota accents I would most associate with the movie Fargo, which sucks the life out of the poetry and turns all the characters into an amorphous mass.

But characterisation is quite obviously not the point; image and movement are. Around the stage (and blocking the Swan's usually excellent sightlines a bit) are four TV screens, showing clips of what looks like documentary footage of Eskimos, sometimes intercut with scenes from old movies (I'm sure I spotted a young Warren Beatty at one point.) Two of the screens show the action the right way round, the other two show the mirror image. The US actors frequently watch these screens, mimicking the actions they see there, timing them to coincide with the video footage. We're definitely meant to constantly notice the fact that they're looking at the screens: According to their website they've been working on this since 2010 (!) so I reckon they should know their moves by now; and often the actors choose not to look at the monitor in their direct eyeline, but crane their necks to look at another. But whatever the reason for drawing attention to it, its effect is the same: The actors aren't engaging with each other, their own characters or the audience. Why, then, should the audience engage with them? 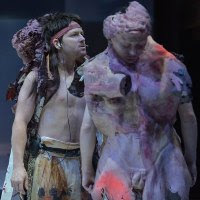 In the mass of undifferentiated Trojans, occasionally Marin Ireland as Cressida and Ari Fliakos (who might be quite cute under the godawful wig) stand out - noticeably this happens when their Fargo accents slip and they can (presumably by accident) sneak in a hint of personality. Scott Shepherd's accent as Troilus however stays firmly in place - unfortunately so, since he ends up sounding like Kermit the Frog. There's also a bit of the 90210 theory of casting teenagers going on, as he's (if I'm being very generous) twice the age of the character he's portraying, which is embarrassingly obvious in his attempt at gawky, giggling awkwardness after his first night with Cressida. (On a side note, the absolute hands-down best bit of the Trojan side of the production, and not for the reasons intended, whatever they may be: Whenever a character is about to run off stage, he does, in utter and complete seriousness and respect for the Art of it all, a little sideways run on the spot for a few seconds before setting off. You know how cartoon characters' legs run for a moment before they actually start to move? That, but funnier.) 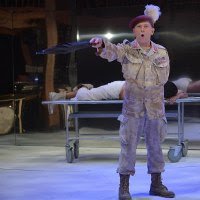 There's also a distinctly middle-aged feel to the RSC's Greeks, although here it's deliberate - these may be legendary warriors but we're a few years into the siege and when we meet them their celebrations at a successful battle are cut short but coughing fits, cramps and Ulysses' (Scott Handy) need to get to his asthma inhaler. Ravenhill hasn't really captured the comedy of this side of the play but it's undoubtedly a better storytelling job, and in terms of character almost aggressively better than their counterparts: As Danny Webb swaps between different hats and accents to jump between Agamemnon and Diomedes, or Clifford Samuel slips out of Patroclus' high heels and grabs old Nestor's cane, it's almost as if they're showing off the fact that each of the 6 RSC actors is differentiating more characters than the 9 Wooster Group actors put together. When the Greeks speak, the distracting clip shows get replaced with a sound wave line that reacts to their words; almost a dig at the fact that their voice work is clearly better. (Of course I may be projecting a lot of this - Three Kingdoms has made me ultra-aware of the possible tensions and rivalries when very different international companies collaborate.) 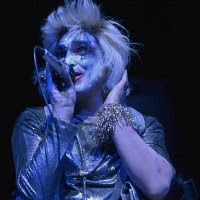 There's some interesting ideas from Ravenhill's side of things; I liked the juxtaposition of Zubin Varla's wheelchair-bound, hermaphrodite Thersites with Joe Dixon's Achilles who simply chooses to be wheeled everywhere on a hospital trolley out of sheer laziness; and whose status is such that he can choose to turn up to a meeting with the generals in a full evening gown 'cause he knows nobody would dare question his sexual leanings. But largely the RSC end of things focuses on clarity, character and strong voice work - as the Wooster Group seem to be showing off their use of multimedia and movement to the full, so too Ravenhill seems to have opted to present his side of the production as the very heart of what the RSC does best. The moments, increasing as the play goes on, of the two sides and companies meeting, bring about a sometimes interesting, if bonkers dynamic. 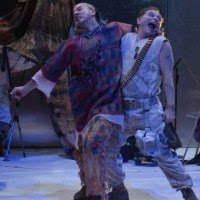 But really this production is overshadowed by the bizarre and ultimately obstructive choices on LeCompte's side of things. Image and style are clearly valued above character and story (indeed the Trojan side of things is very hard to follow.) We had a lengthy discussion afterwards (one thing you can't accuse the production of is leaving you short of things to talk about) but the main thing Kelly wanted to say was that in wanting to so overtly make "art" in heavy quote marks, it lost the crucial intention of Shakespeare making theatre for the people. And that, as the directing seems to have been done in an editing suite, the results of which the actors then had to blindly follow, it didn't actually seem to be a production that respected its actors and their abilities much, whereas the RSC's half of the production trusts its actors as its greatest resource.

Troilus and Cressida by William Shakespeare is booking until the 18th of August at the Swan Theatre, Stratford-upon-Avon; and from the 23rd of August to the 8th of September at Riverside Studios, London.