PREVIEW DISCLAIMER: This review is of the penultimate preview performance. 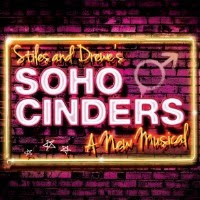 Soho Cinders is a long-gestating project from Stiles and Drewe, the songwriters behind last year's Betty Blue Eyes and the new songs in Mary Poppins. And though musical theatre is famed for being popular with a gay audience, you can see why a show as overtly gay as this one wouldn't quite be looking at a big West End run. Instead it gets an appropriate berth as Soho Theatre, just up the road from its Old Compton Street setting. Robbie (Tom Milner) is a student whose mother died without leaving a will, leaving him at the mercy of the two stepsisters who want to get hold of the launderette that should rightfully be his to inherit. Instead Robbie has to support himself by becoming a rent boy, but he's also having a secret relationship with James Prince, a popular, engaged candidate for London mayor. (Although, how exactly it's a secret is anyone's guess; I'm sure there's less public meeting places than at the foot of the Trafalgar Square lions.)

Jonathan Butterell's production is a lot of fun, and showcases a very funny musical (book by Drewe and Elliot Davis) with actually a better hit-rate of catchy songs than Betty - I'd happily buy an album of this, and "You Shall Go To The Ball" was rattling around my head on the way home. The production's pretty slick with a nice set design by Morgan Large that turns a street sign into various locations. The (somewhat overused) narration has a lot of bitchy one-liners and takes a few opportunities to wink at the fact that they've got the familiar voice of Stephen Fry to record it.

Milner is a bit out of his depth in the lead, his vocals not really strong enough - he's perhaps saving his voice in the early scenes for his big Act II showstopper "They Don't Make Glass Slippers," in which he improves but still doesn't quite knock it out of the park. His comic delivery's a bit off as well but hopefully can be worked on as the run continues. He's well backed up though by Amy Lennox as his fag-hag Velcro and the rest of the cast: Michael Xavier (who looks a lot like one of Rupert Everett's previous faces) has a bit of a tricky job as love interest James, as the fact that he's cheating on fiancée Marilyn with Robbie makes him hard to sympathise with, especially as she's played by the excellent Jenna Russell. A revelation that Marilyn knew about his sexuality all along comes a bit too late to really solve this problem. Gerard Carey gives good bad guy as spin doctor William, although the one-liners he's given are a bit underpowered.

This being a Cinderella story, the ugly sisters were always likely to steal the show, and Suzie Chard and Beverly Rudd's fake-tanned harpies do just that - their fame-chasing big number "Fifteen Minutes" is a highlight, and a joke about a bowling ball gives Clybourne Park's infamous tampon joke a run for its money. Evil Alex, who came with me to Betty Blue Eyes, also accompanied me to this and he really enjoyed this show as well; I found that the plot's a bit wobbly and the casting not quite 100% right, but this still ends up a really fun, occasionally smutty show. A shame, though, that Soho Theatre have given an 8pm start time to a 2-and-a-half hour show, meaning an unnecessarily late finish.

Soho Cinders by George Stiles and Anthony Drewe is booking until the 9th of September at Soho Theatre.