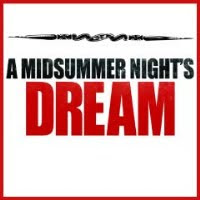 Alternating with Ragtime at Regent's Park is a play that's almost synonymous with the open air venue, although this take on A Midsummer Night's Dream is far from a frothy, family picnic affair. Taking his cue from the memoirs of Mikey Walsh, who provides the programme notes, Matthew Dunster's production is a Big Fat Gypsy Dream, relocating the action to a caravan site that looks set to be flattened to make way for a Westfield-style shopping centre. In a subculture where arranged marriages still exist, Hermia (Hayley Gallivan) loves Lysander (Tom Padley) but her father wants her to marry Demetrius (Kingsley Ben Adir.) If she doesn't comply, her father has asked the gypsy king Theseus, himself about to get married, to exact a harsh punishment. Hermia flees with Lysander, but her friend Helena (Rebecca Oldfield) is in unrequited love with Demetrius, and they follow the pair into the woods - where they get caught up in the magical games of the fairies who live there.

Although still taking advantage of the great comic opportunities this is a dark, disturbing and aggressive Dream that takes the play's undercurrent of violence and puts it at the forefront. We are told early on that the royal couple's courtship was a violent one, but most productions allow us to take Theseus' word for it that those days are behind them. Here it's much more than an aside though, Katie Brayben's very good Hippolyta sporting a black eye. David Birrell's Theseus remains a frightening, sadistic presence right up to the end and this marriage doesn't look fated to be a happy one. Elsewhere Dunster also embraces the true horrific implications of Oberon's (Christopher Colquhoun) love potion trick on Titania (Tamsin Carroll,) whose reaction when she comes back to her senses makes it all too obvious that this particular subplot amounts to sexual assault. 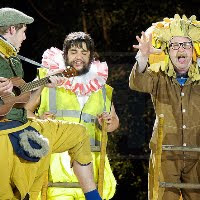 These elements mean that this was always going to be a Dream that borders on nightmare, but the comic setpieces are still given their due. The quartet of lovers is a bit underwhelming but there's a fun take on the rude mechanicals - here a group of construction workers on the shopping centre, terrified of Theseus and putting on their terrible play in a desperate attempt to curry favour with him. Lately I've been seeing a lot of younger-than-usual Peter Quinces; where the younger casting of the recent Custom/Practice production's female Quince turned the character into an amiable control freak, here Harry Hepple's is unwillingly plucked from among the mechanicals and lumbered with the director's job. Dunster has held the interval back fairly late because he wants to take a lot of time over the troupe's hilariously inept performance, which is creatively staged and given a musical twist here - although even this silliest of scenes is here given a menacing edge. 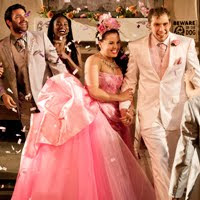 With an inventive set (again by the prolific Jon Bausor) and OTT costumes (by Laura Hopkins) this is a production visually rich in ideas as well as the obvious attention that's gone into the text work by the director, to make what's on the page match the high concept. I wouldn't want every Midsummer Night's Dream to be like this but for people interested in the play this is a fascinating look at its dark underbelly.

A Midsummer Night's Dream by William Shakespeare is booking in repertory until the 5th of September at the Open Air Theatre, Regent's Park.