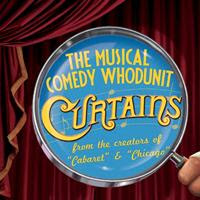 Kander and Ebb's Curtains is a fairly obscure musical by the standards of the songwriters of Cabaret and Chicago (they obviously liked one-word titles that start with "C.") It got a Broadway run in 2007 but no West End transfer, so Robert McWhir's production at the Landor, the pub theatre with a particular focus on musicals, is its UK professional premiere. A play-within-a-play, it follows the Boston run of "Robbin' Hood," a musical with hopes of making it to Broadway, but troubled not only by the unfinished songs but also by the terrible performance of the lead actress, a Hollywood starlet unable to hit her notes or remember her lines. When she suddenly drops dead at the curtain call, one problem at least is solved; but the policeman investigating insists on keeping the cast locked in the theatre until the murder is solved - and until the troublesome big number can be rewritten. 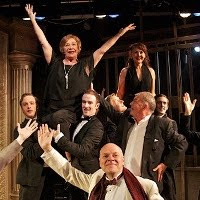 The Landor is a dab hand at bringing big performances into a small space and Martin Thomas' set makes creative use of the awkwardly-shaped stage. In a large cast there's a lot of fun performances - Buster Skeggs as the acid-tongued producer and hyper-critical mother is good value, and if Bryan Kennedy's director is a bit of a Roger DeBris clone, Jan said he'd known a director just like him, so some stereotypes exist for a reason. Jeremy Legat has fun as Lieutenant Frank Cioffi, the investigating officer with thespian pretensions of his own, who frequently finds himself more concerned with helping the cast re-stage the big number than with solving the crime. His romance with Bronwyn Andrews as the murdered girl's understudy is a bit of a damp squib, as is the secondary love story of Fiona O'Carroll and Leo Andrew as the show's divorced songwriters. But the performances are all of a high standard and there's strong backing from a good-looking ensemble. 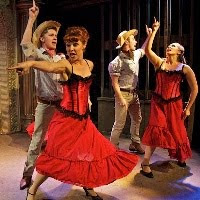 This isn't really Kander and Ebb's most memorable collection of songs, although they're likeable enough I didn't find myself humming any of them on the way home. And the show in general is a lot stronger in the comedy murder mystery stakes than in the attempts at emotional moments - there's a bit of a lull in the middle of the first act as a result. But overall this is a fringe hit, the sort of show that you can understand not setting the world alight when put on a huge Broadway or West End stage, but in an intimate setting makes for great fun. And the Landor has also done a lot better with the sound balance here: The overamplified instruments which drowned out the vocals in a lot of their past musicals are rarely a problem here. This was the first time Jan had seen a musical of this scale put on in a space this small and he was impressed not just by the execution but also by the commitment of the cast. They certainly seemed to be enjoying themselves, and so did the audience. 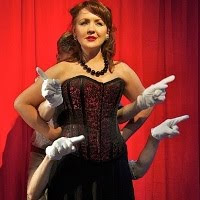 Curtains by John Kander, Fred Ebb, Peter Stone and Rupert Holmes is booking until the 1st of September at the Landor Theatre.