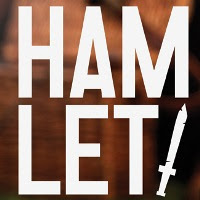 I enjoyed, but wasn't blown away by, last year's small-scale touring productions from Shakespeare's Globe. Normally that wouldn't be enough to make me revisit them, but with new casts and a relatively quiet theatrical summer, I figured they'd be worth another look. With Hamlet in particular, productions tend to be heavily built around the lead actor, so I'm interested to see how recasting him affects the experience. Last year, Joshua McGuire played Hamlet in Dominic Dromgoole's production; Bill Buckhurst now restages it with Michael Benz taking over the title role. A troupe of eight actors tells the story of the Prince of Denmark, whose father's ghost informs him he was murdered and demands revenge; but Hamlet's racked by doubts that keep him from taking action against his villainous uncle.

There's an underused wooden frame at the back of Jonathan Fensom's set design but for the most part scene changes are done by placing a number of planks and steps in different configurations which, like the rest of the staging, makes a point of ingeniously stretching the production's bare resources. This is a comparatively short Hamlet (the edit takes its structure, if not its text, from the First "Bad" Quarto) that hits all the major story points and is as clear as it could conceivably be with so few actors doubling up so many roles, and doing a nice job of distinguishing between them. It does still have a bit of the feel of an experiment though, of seeing just how few actors you can get away with using to tell this epic story. 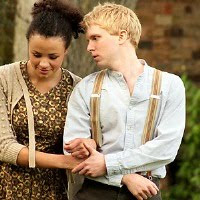 The frantic nature of the doubling, costume and scene-changing lends itself to this being a funny production of the play - a take I always approve of, not only because I think it's supported by the text but also because it makes the inevitable tragedy all the sadder when it finally comes. There's an almost-farcical feel at times, although it does mean the humour's tone isn't entirely set by Hamlet himself. Actually apart from the small cast and the cuts to the text this is a fairly straight-down-the-line production without a high concept, which means it's comparatively easy for a different actor to step into the lead. Where McGuire's was a particularly unhinged Hamlet, Benz's take on the Prince has a bit more control over where the feigned madness ends and the real thing begins. He gives us rather a cold Hamlet in fact, with a cruel streak that shows up sometimes - this is the Prince who knows someone has to be punished but keeps lashing out in the wrong directions. Usually it's Carlyss Peer's Ophelia who bears the brunt of his misdirected anger, and it results in Peer giving us a moving take on Ophelia's mad scene, helped by some understated background music (composed by Bill Barclay.) 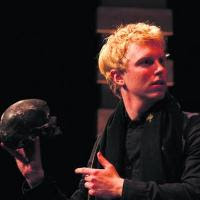 At times, particularly early on, I found Benz's delivery of the lines rather clipped in a way I wasn't a fan of, and he's not the only actor to sometimes slip into a rather declamatory style. But he does warm up into a more natural performance and isn't afraid to throw away some of the more iconic lines. I felt Christopher Saul's Polonius was trying a bit too hard to get laughs - hardly necessary, in that role. I thought Dickon Tyrrell did particularly well with differentiating his multiple roles of the Ghost, Claudius and the Player King (at times having to play both the latter two in the same scene) although his Claudius wasn't quite menacing enough. Choreographer Siân Williams has come up with a rather sweet way of moving from the final tragic tableau to the jig, that puts a nice finishing touch to the production. For someone who's seen a lot of productions of Hamlet this isn't perhaps one that's destined to stick in the memory, and I found some of the line-readings a bit rushed, but for a production that's made a bit point of being stripped back to basics, it does cover all the bases of the story. 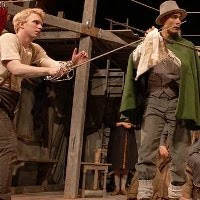 Hamlet by William Shakespeare is booking in repertory until the 1st of September at Shakespeare's Globe; then continuing on tour to Washington DC, New York, Boston, UC Davis, Santa Barbara, Arcata and Santa Monica.