Theatre review: Made in Dagenham 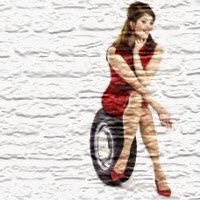 The film-to-musical adaptation has well and truly become a West End fixture, but when the end result is as fresh and downright eccentric as Made in Dagenham, it's clear there's a labour of love involved, not just a cynical recycling of a familiar property. The story of the 1968 strike by female workers at the Ford plant in Dagenham now has a book by Richard Bean, music by David Arnold and lyrics by Richard Thomas, and gets a typically inventive debut production from Rupert Goold. Gemma Arterton plays Rita, who works as a machinist sewing chair covers for Cortinas. As part of a larger deal with management, the workers' union has agreed that this job can be downgraded to "unskilled" and, reluctantly at first, Rita joins in the talks to get their pay grade back. But even if the women's skill is recognised, they will still earn significantly less than men on the same grade, so she aims higher: The women's demands have now changed to equal pay with the men.

Bunny Christie's set takes its inspiration for the factory from the plastic sheets of parts you would find in a model car kit, and when the curtain, with the show's title on it, is raised, it seems to leave a couple of letters behind on the stage. It's a fitting visual for a show that at every turn deliberately eschews the slickness of most big-budget musicals. 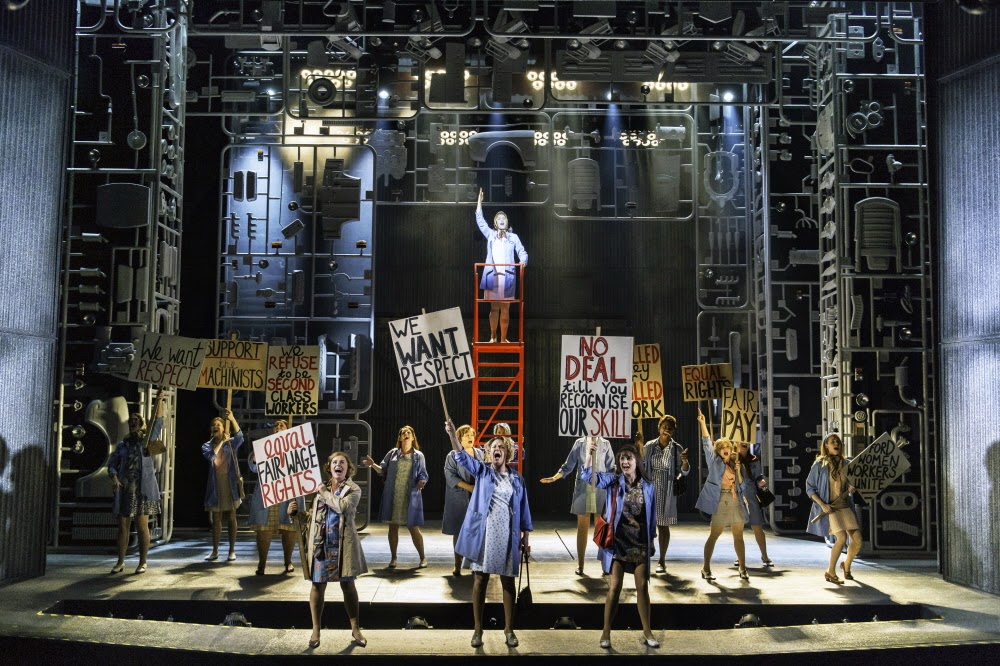 Because although the budget is clearly big, and there on stage for everyone to see, there's a particularly British sense of humour and self-mockery to the piece that's built from the script and lyrics upwards. I don't remember when I last saw a show that reveled so much in filling its songs with whatever lyrics scanned and sort-of-rhymed: The lyric "Made in Dagenham, Laid in Dagenham, Come get your cat spayed in Dagenham" has already achieved a kind of notoriety, while Heather Craney's Clare has an entire song built around not being able to think of the right word (or, consequently, the right rhyme.) 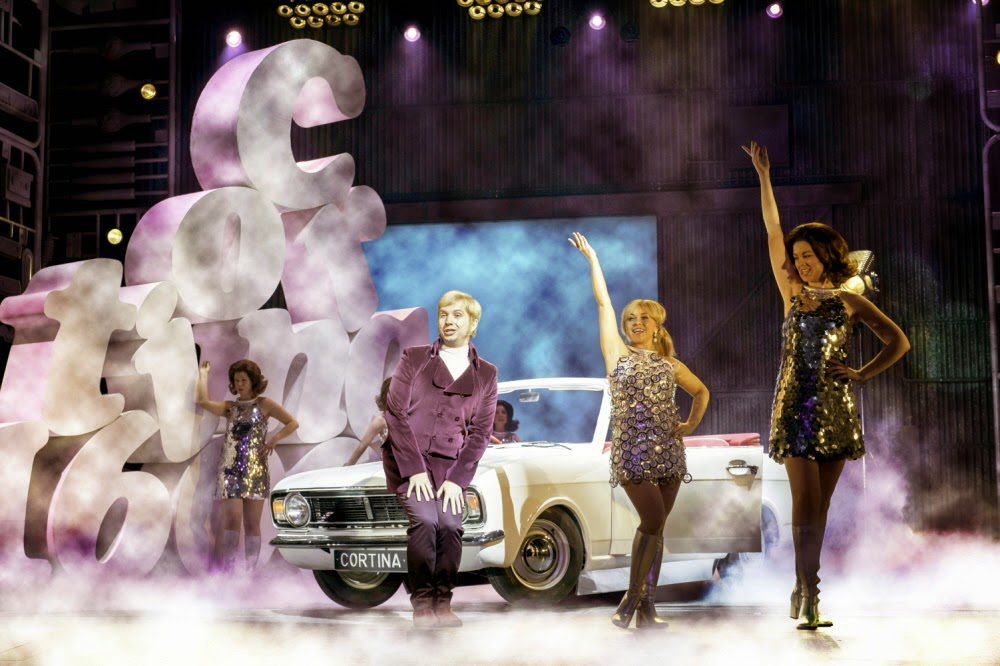 Made in Dagenham deserves to be a hit but it needs to be one here because the humour is so particularly British there's surely only a handful of other countries where it would find an audience. At the interval I said I couldn't imagine Broadway getting the joke of its deliberately rough-and-ready nature, and the second act opens with what might as well be confirmation that they don't have plans to take this to America: Steve Furst as Tooley, sent in from head office to sort out the strikers, has a hilariously overblown number full of stereotypes of aggressive American superiority and offensive machismo, that at one point descends into him just shouting words like oregano, urinal and (h)erb the "correct," American way. Goold's production of ENRON tanked on Broadway when the critics felt a British creative team was trying to tell them an American story, and it's hard not to see a certain glee in the sheer amount of bonkers excess he throws at the stage for this scene. 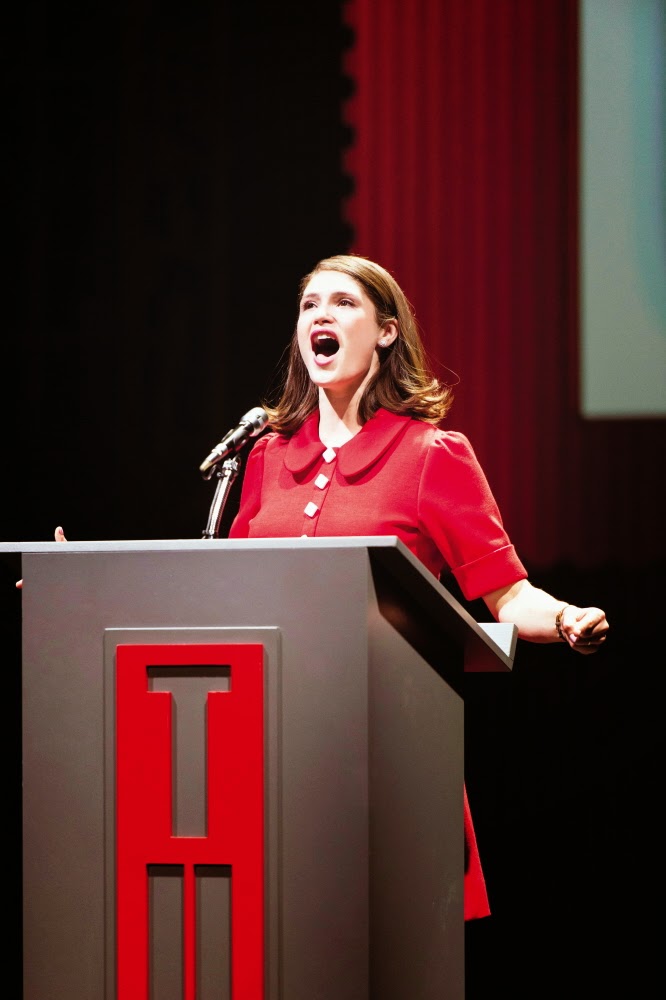 Arterton is always a hugely likeable presence and she provides a force to be reckoned with in the lead here; her singing is good enough rather than spectacular, with a couple of notes seeming beyond her, but then the big belters are mostly reserved for the group numbers or the supporting cast, which is full of strong voices. Adrian der Gregorian is quietly supportive but frustrated as Rita's husband Eddie, Naomi Frederick briskly funny as the no-nonsense, posh wife of one of the bosses, who provides a unexpected voice of solidarity, and Sophie Stanton brilliantly sweary as Beryl. Isla Blair as Connie is the voice of decades of fighting for rights that have come at the expense of her personal life, but it's Sophie-Louise Dann who frequently steals the show as Barbara Castle, the minister balancing her support for the women with the demands of her job. 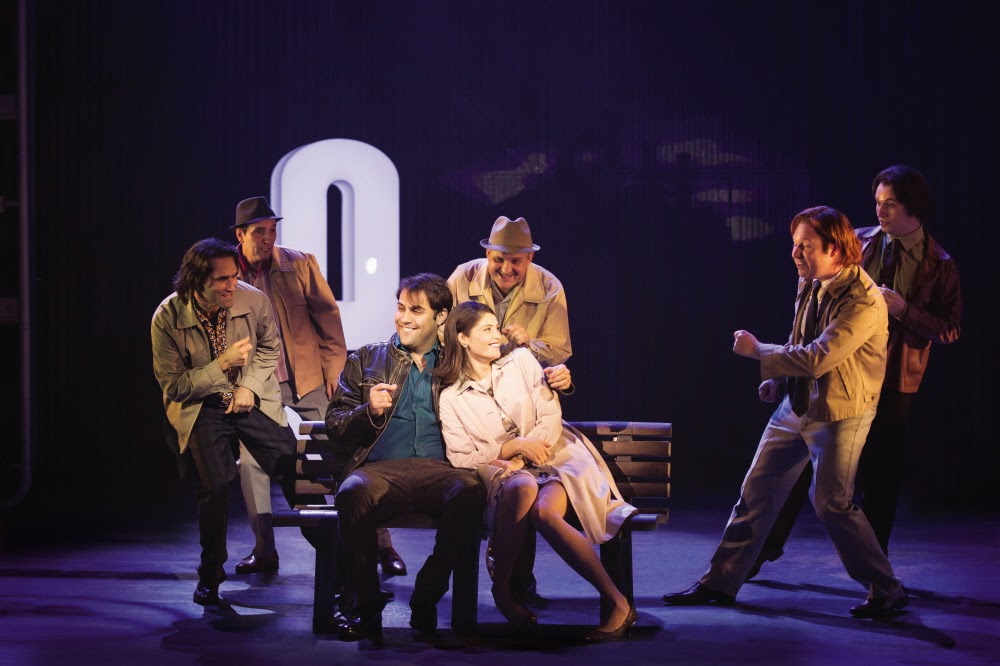 Dann has some of the best gags of the night in her exchanges with Harold Wilson, a frankly bizarre portrayal by Mark Hadfield which it's probably safest to say isn't meant to be a literal impression of the Prime Minister. Arnold's music comes up with more than one tune I was still humming along to afterwards, which isn't an easy thing to ask on a first listen. But it's probably the sheer sense of the bonkers and unexpected (a trade union conference heralded by Wilson in a bumper car) that makes Made in Dagenham a welcome addition to the West End, and one that'll hopefully find a home-grown audience - I can't imagine what the tourists will make of it.

Made in Dagenham by Richard Bean, David Arnold and Richard Thomas, based on the screenplay by William Ivory, is booking until the 28th of March at the Adelphi Theatre.