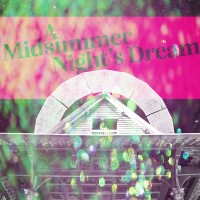 I have fond memories of, and emotional connections to, a lot of venues, but in the last year of theatres facing an existential crisis it was the thought of never being able to go to Shakespeare's Globe again that hurt the most. So it's probably for the best, given I might have got a bit emotional, that my first trip back to the main house in two summers was to a production I'd seen there before: Sean Holmes' fiesta-style A Midsummer Night's Dream from 2019 has returned to launch the 2021 season, and though both venue and production have had to make a few changes while COVID-19 restrictions are still in place, both have retained the atmosphere that makes them special. In the audience, along with social distancing in the three galleries, and all shows playing without intervals (to stop everyone crowding to the loos at once,) the most obvious change is in the Yard, where there's usually up to 700 standing groundlings. For the first couple of months of the season these have been replaced with just three rows of temporary seats arranged by support bubbles.
Regular readers will both know I have a frequent complaint about the vast price difference at the Globe depending on whether you're physically able to stand for three hours or not, so for my first three shows of this season I'm taking advantage of my one chance to pay £5 for the best view in the house without the ensuing fortnight of back pain. (Let's face it, aluminium garden furniture makes this more comfortable than most seated visits as well.) 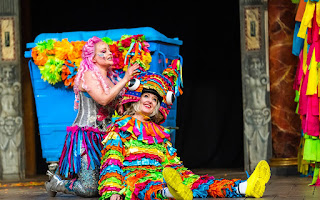 You can read my original review here; the revival's cast is a mix of returning originals and new faces, with Sophie Russell donning the piñata costume as Bottom; she's a bit low-key in the role but comes into her own for the Pyramus & Thisbe finale. Rachel Hannah Clarke is a quiet scene-stealer as a Snug whose lion is very much of the cowardly variety, and this time around it stood out to me how much contrast Nadine Higgin brings to her role doubling - her chilly Egeus is genuinely a bit scary, compared to her boisterous MC of a Quince. I didn't think they'd be able to keep the conceit of seconding a groundling to read in Starveling, but they've managed to find a socially distanced way around it. 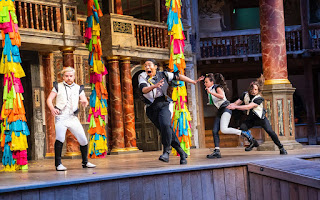 The cast are socially distanced too, which isn't too noticeable most of the time - it's a large, multilevel stage, and at the best of times the best way to fill it is having the cast spread out and run around a lot. The only awkward moments are with the lovers, where a lack of intimacy isn't exactly ideal, and the constant fighting has also proved hard to choreograph this way. Of this quartet only Ciarán O'Brien's Demetrius returns, and I don't know if it's just that I was closer to the stage this time but Jean Chan's costume design really seems to be determined that we all know which side O'Brien dresses to at all times (it's the right.) Nadi Kemp-Sayfi, Bryan Dick and Shona Babayemi play Hermia, Lysander and Helena respectively, the latter dealing with the problematic lines about the spaniel with more than a hint that Helena's suggesting some light S&M. 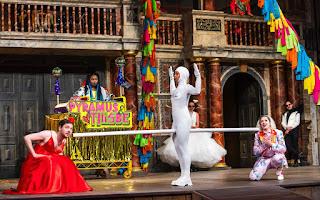 Another notable aspect of the production was the idea that there were multiple Pucks, and this time it feels like the idea of them all competing with each other for Oberon's favour was ramped up; this means a great payoff in the way the epilogue is performed, which also plays on another running gag involving blow darts. George Fouracres probably ends up with the largest share of the role, as the puck who gets the lovers mixed up, and gets more Brummie by the line as Oberon berates him for it; and his Flute also steals the final play-within-a-play. Things at the Globe may not be quite back to business-as-usual but this was a canny choice to bring back, and if the auditorium isn't full this is an audience who are really excited to be there again. I'd got to the South Bank early to take everything in and refamiliarise myself, so in the end I didn't quite cry with the emotion of being back, but as Victoria Elliott's Titania paused over the line "bless this place" I came pretty close.
A Midsummer Night's Dream by William Shakespeare is booking in repertory until the 30th of October at Shakespeare's Globe.
Running time: 2 hours 15 minutes straight through.
Photo credit: Tristram Kenton.
Posted by nick730 at 22:24