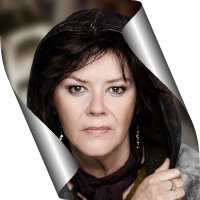 Mother Courage is, apparently, the role Josie Lawrence has most wanted to play her whole career, and now she's got the chance she doesn't waste it, bringing a whole new level of nuance to Bertolt Brecht's antiheroine. Hannah Chissick's production of Mother Courage and Her Children at Southwark Playhouse uses the Tony Kushner translation from the last National Theatre outing, right down to the Duke Special versions of the songs that intermittently break into the narrative. Nominally set during the Thirty Years War, allowing for an epic scope both in time and ranging across Northern Europe, the play follows Lawrence’s Anna “Courage” Fierling as she travels from battlefield to battlefield, lugging a cart filled with food, drink and random provisions she sells to the desperate soldiers. She’s come to dread the possibility of peace, as war is what her entire livelihood depends on.

With her are her three children, who she’s raised with virtues she hopes will protect their lives in the middle of all this conflict; it ends up being these very qualities that kills all three. 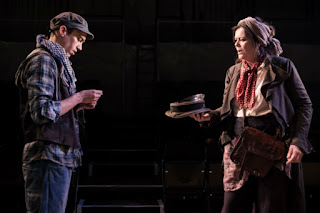 Eilif (Jake Phillips Head) is The Brave One: Courage won’t get away without at least one of her sons getting conscripted, but at least Eilif’s hot-headedness and brutality makes him an efficient soldier. The behaviour that’s encouraged during war is enough to damn him during a brief ceasefire though. Dim-witted Swiss Cheese (Julian Moore-Cook) is The Honest One: Given a safe job as treasurer for a regiment, he hasn’t inherited his mother’s survival instinct for changing sides when the tide turns, and remains loyal to the regiment even when it threatens his life. And, left mute and probably mentally scarred by an assault by a soldier years earlier, Kattrin (Phoebe Vigor) is The Kind One: Longing for children she knows she’s unlikely to ever have, she’s willing to risk her life to warn a sleeping village of an impending attack. 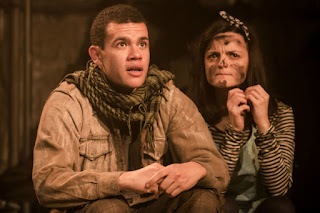 Of course, it’s not a spoiler to say all three of Courage’s children die, as this inevitability is the point, and something Brecht makes clear early on. In fact this production focuses especially on this theme of not being able to make a living out of war without making huge sacrifices. Lawrence is a very human Courage, not really playing her as a metaphor for wider profiteering out of war (realistically, the people who make the most profit out of conflict rarely do face the consequences themselves.) Instead she’s very much just Anna Fierling, a woman who’s been –just about – surviving off the back of war for so long she can’t see any other option. 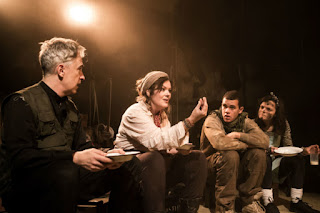 Mother Courage is usually played as all front and ruthlessness, relentlessly ploughing her way through the battlefields to pick up the scraps, but Lawrence gives her a vulnerability we don’t often see from the character. There’s a constant edge of desperation to her, her song-and-dance numbers when she arrives in a new place awkward, as if doing this to attract custom isn’t what comes naturally to her but what has to be done. It’s an interpretation that opens the play up to being less ambiguously her tragedy, which possibly sacrifices some of the play’s multiple levels, but it’s worth it for making Lawrence one of the most moving and memorable performances of the role I’ve seen. It’s also one that allows for a certain amount of tonal balance, Lawrence and the cast finding a lot more of the dark comedy in the text than I’m used to seeing. 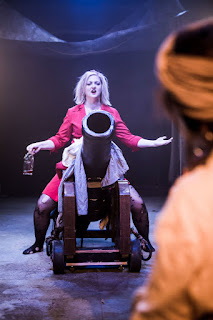 Not everything about the production matches up to its lead: Barney George’s set is a traverse, lending an intimacy you don’t often see in this play, but Chissick dealing with the staging’s limitations by setting an entire scene on the musician’s balcony behind one of the seating banks is unforgivable – the odd exchange out of the audience’s sightline is fine, but a solid 10 minutes’ worth means I’d consider half the seating –the higher seat numbers - to have a severely restricted view of the action. If booking I’d certainly say go for the bank that starts with A1, on the bottom half of the seating map on the website. 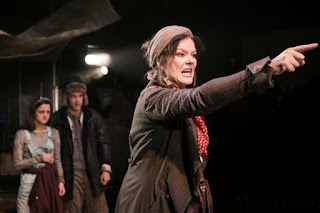 It’s also a cast of pretty mixed ability; not everyone can stand their ground against the leading lady’s performance, although Vigor gets a lot into her wordless role and prostitute-turned-lady Yvette brings a different, lighter energy to the play thanks to Laura Checkley’s performance. Maybe not a show for everyone, as Laurie left at the interval, but I think that was probably down to the play itself rather than the production. He struggled to get his head round Brecht’s deliberately discordant styles – I guess he was just too verfremdungsed by the effekt. For me though although flawed this is a production that’s worth seeing for Lawrence bringing something new to the role, and proving she was right to seek out a chance to play it.

Mother Courage and Her Children by Bertolt Brecht in a version by Tony Kushner is booking until the 9th of December at Southwark Playhouse’s Large Theatre.