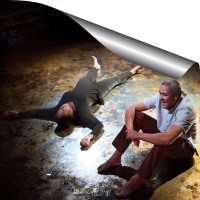 There are plenty of stories about people whose fates are sealed by the colour of their skin, but Dael Orlandersmith offers one where every tiny difference in pigmentation seems to have a specific, unavoidable path attached to it. As part of a Genesis Award Nancy Medina directs a revival of 2002 play Yellowman, which is part love story, part memoir, but overwhelmingly about prejudice and class distinctions based on skin tone within the black community. Eugene and Alma both grew up in South Carolina, each of them with one parent darker-skinned than the other. Eugene (Christopher Colquhoun) has taken after his lighter-skinned mother and so is a colour referred to (usually with some resentment) as “high yellow-red;” Alma (Nicola Hughes) also looks like her mother, which means she’s much darker and has to put up with a lifelong tirade from her alcoholic mother about how fat, ugly and black she is.

The childhood they recall is happy though; inevitably as children they ignore their parents’ advice on who they should or shouldn’t mix with, and become friends with whoever they want. This also carries on into their teens though, as their friendship turns into a relationship. 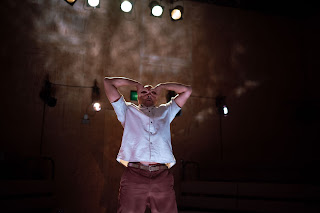 In fact their skin colour is never something they grow to care about, but it matters seemingly above all else to those around them – not just the older generation but Eugene’s light-skinned friend, who enthusiastically buys into his own ethnic superiority and viciously bullies those darker than him (trigger warning for a description of cruelty to animals.) I can’t speak to her temperature or level of funkiness, but Medina directs with a steady hand, Colquhoun and Hughes giving energetic but grounded performances on Max Johns’ in-the-round set, whose mirrored floor has a burnt effect that Nao Nagai’s light bounces off, adding a sense of unease to a story that’s largely played with a focus on the joy the characters find in each other and in the world. 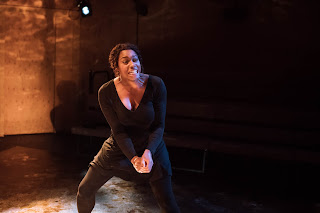 But they can’t escape the bleak ending that everyone predicted for them becoming a self-fulfilling prophecy, and their story heads towards violence and the loss of the individuality they fought for. Although Eugene mentions that his skin colour means he gets straightforward racism from white people and rejection from darker black people, no actual white characters appear in the play. Instead Orlandersmith is scathing about this self-destructive kind of pernicious racism that the black community turns on itself. But Medina also ensures this happens sympathetically towards the two central characters (the actors also have to take on everyone else in the story, including a nuanced variety of accents that also speak to class distinctions) so that the dark subject is both set within an entertaining and likeable performance, and hits harder when their efforts to escape their expected fates fail.

Yellowman by Dael Orlandersmith is booking until the 2nd of December at the Young Vic’s Clare (returns only.)