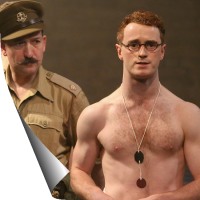 Peter Nichols and Dennis King’s revue-style play Privates on Parade was last in London five years ago in an entertaining, starry West End production that papered over a lot of the problematic cracks. It now gets a much more intimate 40th-anniversary revival at the Union, and while Kirk Jameson’s production has its moments, it also feels much more exposing of the ways Nichols’ social commentary has dated. During the Malayan Emergency that came soon after the Second World War, Private Steve Flowers (Samuel Curry) is transferred from intelligence to SADUSEA, the Song and Dance Unit South East Asia, which tours the area giving morale-boosting performances to the troops. They’re led by Acting Captain Terri Dennis (Simon Green,) who likes to perform as Vera Lynn, Carmen Miranda and, if he’s feeling particularly butch, Noël Coward.

The troupe is in fact unusually full of openly gay men for the British army in the late 1940s, and the laid-back mood means this is for the most part accepted, but while he goes along with it Flowers is never particularly comfortable with his new environment. 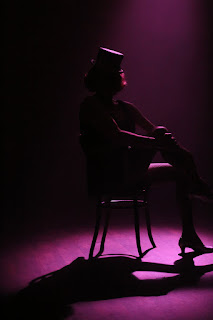 While acting is hard to break into so I have no problem with what route anyone takes to get their break in it, Curry is so low-key his lines actually have a tendency to tail off into a mumble, and you really need a stronger performer to handle a lead as downright unlikeable as Flowers. Introduced as a bit of a wide-eyed innocent, his dislike of his new comrades is never too far from the surface, and he wastes no time stepping into the hated Sergeant-Major’s (Matt Beveridge) shoes when they become available. His most callous side, though, is seen in the way he treats the only female troupe member, Sylvia (Martha Pothen,) even though her actions aren’t as innocent as they first seem either. Sadly we don’t get the nuance the character really could do with. 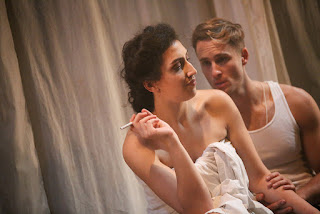 It’s something that could be said for much of the production: The play’s attitude towards sexuality might be surprisingly openly accepting for 1977, but the points it makes about race are blunter and haven’t always dated as well. There’s a constant stream of racist language about the locals, a contempt that’s actually seen to damage the soldiers in ways they don’t even realise; their servant Lee (Mikey Howe) is treated as an idiot, never suspected as a Communist spy who’s taking them down from the inside. On the other hand this commentary doesn’t change the fact that Nichols hasn’t actually given Lee any lines. Played without much edge it all just comes across as dated racist jokes without the ambiguity or point. 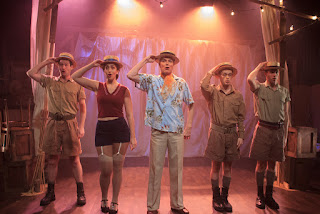 More confident are the musical comedy routines that break up the action, Matt Hayden as Eric and Tom Bowen as Kevin adding the awkward enthusiasm of the two straight troupe members who aren’t uncomfortable around their gay colleagues. But there’s still always a sense of playing it safe – I know I sound like a parody of myself if I bemoan a lack of nudity, but the knots the production ties itself into to make sure that despite all the onstage showering nobody actually parades their privates do make a nonsense of the title’s seaside-postcard pun; never mind Eric keeping his underwear on for a scene where him thinking standing naked in the rain will cure his STDs is the whole gag (and a comic counterpoint to the much darker goings-on in the same scene.) 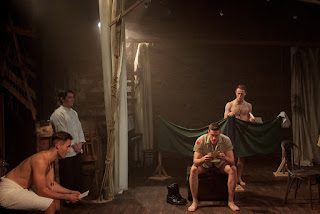 So this is an odd one, in that playing it a bit too straight leaves the play feeling even more dated than it actually is, not acknowledging the double meaning of much that’s going on. A cast of decidedly mixed ability isn’t going to help, and I think my reaction to the play’s way of dealing with race will inevitably be affected by it being in a theatre with a sketchy track record on diversity. But at times the end-of-the-pier comedy still works, particularly in the context of it being delivered awkwardly by soldiers who’ve been conscripted into it. A bit of the comic and sexual spark the play needs is definitely missing though.

Privates on Parade by Peter Nichols is booking until the 17th of December at the Union Theatre.