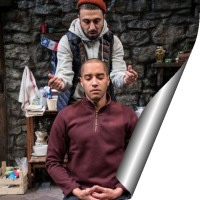 There’s comedy royalty behind the scenes of The Retreat, the stage debut by Peep Show and Fresh Meat co-writer Sam Bain, directed by Kathy Fucking Burke; and it shows in an evening that may not hit every mark but doesn’t put a foot wrong when it comes to the laughs. Samuel Anderson plays Luke, a former high-flying city broker who’s given it up since meeting Tara (Yasmine Akram) at a festival. She runs a meditation centre in the Highlands, where – in a bare shack designed by Paul Wills - the whole play takes place in a single scene. In the course of a year since meeting Tara, Luke has become a Buddhist and left the consultancy he founded, and is now two months into a three-month meditation retreat. This is when his older brother Tony (Adam Deacon) turns up unannounced, ostensibly to tell him about the death of a distant relative.

Naturally Tony really has other reasons for making the trip to Scotland, but as well as selfish motivations it seems he does have some genuine – and well-founded – concerns about what his brother’s doing. 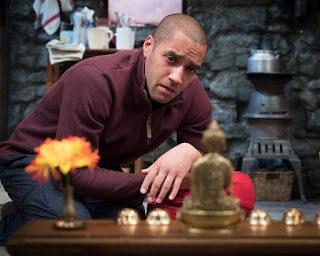 It’s hard not to see something of Bain’s best-known TV work in the dynamic between the two brothers: The overachieving, holier-than-thou Luke who’s given up a life of all-nighters at work followed by booze and hookers, for another kind of extreme high in his plan to become a Buddhist monk; and the gobby Tony, just about getting by as a Deliveroo driver and still getting his highs from the same drugs he’s always been on. There’s definitely a satirical dig at the expense of a certain kind of upper-middle class spiritualism, in the play’s main plot point of Luke wanting to sell off the flat they share and give the proceeds to the centre: He can afford the dream of a life with no belongings because he has so many, but if he goes through with it his brother will be left homeless and in debt. 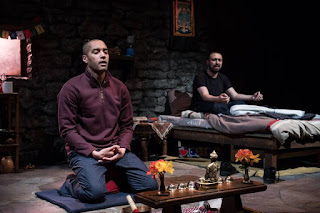 Most of the comedy comes from the dialogue, though, and while Anderson and Akram are good at their characters’ varying levels of delusion, it’s Deacon who gets the lion’s share of the gags, many of the best of which are delivered in a throwaway manner that’s very nicely timed. The cast are also well-judged in the way they deliver the more dramatic moments as the brothers’ dynamic is revealed and Tony tries to save Luke from throwing himself into the latest in a long line of grand gestures he hopes will fix his underlying unhappiness. 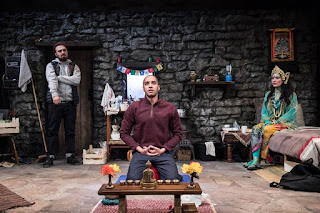 Performances aside, this more serious side is less convincing in Bain’s writing than the comedy is, and there’s an inevitability to Tara turning out to be something suspiciously close to a con artist trying to fleece the gullible. (At least I guess if you’re going to insult a religion Buddhism’s the way to go, the worst they’re likely to do is meditate on how it doesn’t matter what you say because we’re all going to die anyway.) So The Retreat occasionally flounders when it comes to these dramatic moments, but it never dips for long as there’s always another comic highlight on the horizon, and as a comedy this doesn’t disappoint.

The Retreat by Sam Bain is booking until the 2nd of December at Park Theatre 200.