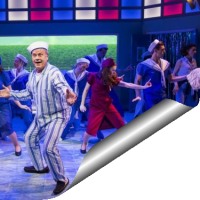 I’m not above enjoying something a bit sentimental at times, and Tim Burton’s film Big Fish was one case that hit the mark for me, so a musical adaptation of Daniel Wallace’s novel seemed worth a look. The film’s writer John August also provides the musical’s book, with songs by Andrew Lippa and, following an unsuccessful Broadway production, Nigel Harman directs a much-reworked, smaller-scale British premiere at The Other Palace. Edward Bloom (Sideshow BobKelsey Grammer) is in hospital, dying, and his recently-married son Will (Matthew Seadon-Young) wants to find out about his father’s life before it’s too late. The trouble is Edward has spent his life spinning tall tales and isn’t planning on telling a more down-to-earth version just yet. The play is based around his hospital room, as Will and his fellow-journalist wife Josephine (Frances McNamee) search for clues to the truth.

But it also spins out into the fantasy world of Edward’s life story the way he’s always told it, complete with a giant (Dean Nolan,) a werewolf (Forbes Masson,) and a daring plan to foil an assassination attempt. 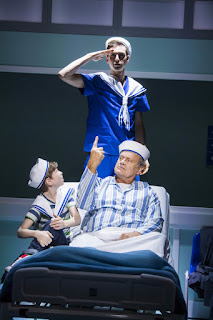 Crucial to Edward’s description of himself is that as a child he met a witch (Landi Oshinowo) who showed him his own death, so he’s always been fearless to throw himself into any adventure because he knows that isn’t how he goes. Jamie Muscato plays the fairytale version of Edward with the right degree of bright-eyed enthusiasm in a show that, despite being sold on star casting, is more of an ensemble effort – I must admit the combo of Big Favourites Round These Parts Seadon-Young and Muscato was a bigger sell for me than Frasier Crane. 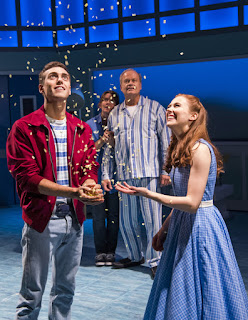 I was also looking forward to seeing McNamee in an actual musical, having heard her sing a couple of times in straight plays. She doesn’t disappoint vocally, and she’s got the kind of bright-eyed charm that makes her slot into the tall tales effortlessly (her reaction to meeting one of the story characters at the end might be my highlight of the show.) It makes her a natural counterpoint to Seadon-Young, who pulls off the tricky role of Will, regarded by his father as a prematurely middle-aged stick-in-the-mud, but who needs to be one of the audience’s main points of sympathy. As Edward’s wife Sandra, Clare Burt is largely left with melancholy songs and poignant scenes which she provides very well, but she’s allowed to join in the fun as well occasionally. I even managed to put Grammer’s personal politics aside long enough to be moved by Edward’s climactic reconciliation with Will. 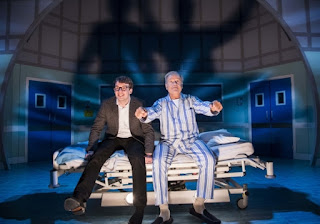 I enjoyed the way Tom Rogers’ design never really left the hospital ward. Although there’s a few projections adding background to the tales, mostly the fantasy worlds are created out of medical supplies: Edward’s home town a Munchkinland made of green scrubs, a witch’s costume made of sterile gloves, a circus knife-throwing act that instead throws surgical equipment (the obvious fakeness of the trick exaggerated, in keeping with the artificiality of the storytelling.) It’s part of the tongue-in-cheek element that Harman’s production brings, the odd nod and wink to stop it lapsing too much into saccharine Americana – I liked the acknowledgement of the exhaustingly steep stairs in a chase sequence around the auditorium. 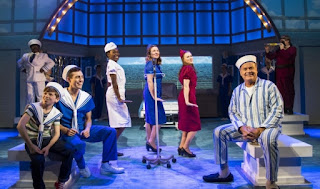 The variety of musical styles is a bit schizophrenic but if any kind of story structure suits that this is probably it; I can’t say Lippa’s songs are stuck in my head now but they were still floating around there as I left the theatre, which is about as good as I can usually ask for. I suspect the essential cheesiness and sentimentality will make this a Marmite show but for me it stayed on the right side of kitsch without lapsing into twee, real enthusiasm in the performers and creatives giving it a touch of magic.

Big Fish by John August and Andrew Lippa, based on the novel by Daniel Wallace, is booking until the 31st of December at The Other Palace.