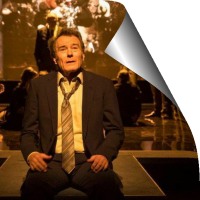 It’s been a week of US TV stars on stage for me, with Mr Robot on Monday, Sideshow Bob on Tuesday, and now the big one: The dad from Malcolm in the Middle (he’s also done some… slightly edgier stuff since then.) Very much the director all the big names want to work with now, Ivo van Hove brings Bryan Cranston to the London stage for the first time to play Howard Beale in Network, Lee Hall’s adaptation of the 1976 Paddy Chayefsky film. Beale is the lead news anchor on a poorly-performing TV network, and the news is struggling more than anything. When he’s told he’s being replaced Beale, taking advantage of the fact that nobody’s really paying attention to him, announces that he’ll commit suicide live on air during his final broadcast. It turns out to be exactly the thing to give his ratings a boost.

Beale doesn’t actually have to go through with it, because his onscreen nervous breakdown continues to provide plenty of fodder as he starts ranting about conspiracies real and imagined, giving him a loyal fanbase of those feeling disenfranchised across America. 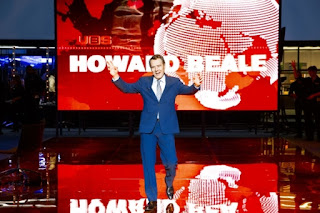 Given the kind of staging van Hove and his designer Jan Versweyveld have favoured in the past, there’s an obvious appeal to the idea of turning the Lyttelton stage into a huge open-plan newsroom, with something happening in most corners of the stage most of the time, and the usual large screens and projections filling the audience in on any bits that might be out of their direct eyeline. (Plus you can see the attraction of an environment that’s always counting down to the next live broadcast, to a creative team who like to use countdowns as part their aesthetic.) Going one step further, the fact that some scenes take place in bars and restaurants has led to the whole stage left area being turned into a restaurant with premium-paying audience members (chosen by a load of old ballots) eating three-course meals as part of the show; a commentary on how people watch the news, taking it in as part of the background noise while they eat their dinner. 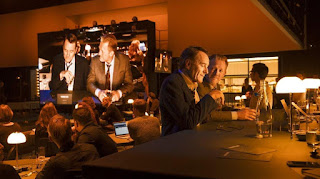 It’s a busy staging but it doesn’t get in the way of telling the central story. Hall’s version feels a little bit more streamlined around Beale himself, where the original film ends up focusing more on the best friend who delivered the news of his firing. The fall of Max (Douglas Henshall) and the rise of the terrifyingly emotionless Diana (Michelle Dockery) remains the major subplot; but although their affair is well-written it’s not as big a hook as the main story so I think it’s an improvement to make them the secondary thread. It does also mean it downplays the story of Diana’s involvement with a terrorist group, which ties into the ending, but I don’t think it’s too much to its detriment. 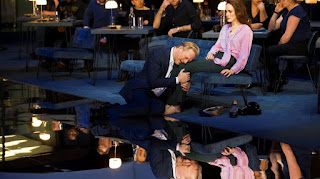 Instead we see the impact of Beale’s surprising fame on a wider range of people, as the network’s new owners, represented by Tunji Kasim’s Frank Hackett, take advantage of his breakdown to build their ratings. On the studio floor level Howard seems to inspire a lot of loyalty – maybe I’m reading too much into the use of the ensemble but the Floor Manager (Stuart Nunn) he punches during his first big rant sticks with him regardless, and newsreader Jack Snowden (Robert Gilbert,) who was meant to get his big break replacing Howard, seems happy to be relegated to his warm-up act once his popularity explodes. 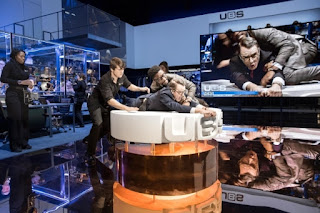 Hall and van Hove keep the original 1970s setting, the topicality of the play’s enduring themes being obvious without needing to oversell it. In a story that keeps coming back to the ability of broadcast news to manipulate the truth, there’s a nicely on-theme feel to the trademark use of live video, van Hove slipping pre-recorded sections into the live footage to make the point that you can't trust what you see on screen, as well as providing a few moments that satisfyingly pull the rug out from under the audience. The theme of Beale as a kind of modern prophet is also tied into a use of religious imagery – his eventual meeting with the head of the company being wittily staged as Jensen (Richard Cordery,) on a raised platform, delivers pronouncements to Howard like a god issuing commandments. 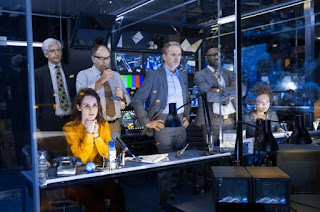 In fact Network is often surprisingly funny, its bitter heart offset by the charm of a leading man who I’m pleased to say lives up to his star billing. Cranston not only gives a powerful performance that keeps you guessing about how in control of his actions he really is; but also has a real engagement with the audience that makes him the perfect choice to play this twisted popular hero, his messianic pronouncements culminating in him ending up sitting in the middle of the audience. 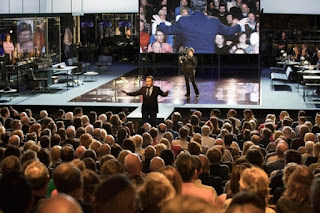 The ambient music that’s another van Hove trademark didn’t quite do it for me as much this time, the four-strong musical group dispassionately playing electronica over the main screen like Kraftwerk looking pleasingly odd, but at times just adding irritation to the soundtrack. But there’s not a lot that disappoints here, an intense experience, well-acted and bringing back the best elements of van Hove’s signature style after a few disappointments this year. And after the bows, a tongue-in-cheek coda that makes the whole thing an exercise in teaching the audience to heckle: Gilbert’s warm-up man has got everyone well-drilled in Beale’s famous catchphrase “I'm mad as hell, and I'm not going to take this anymore,” so when we end with footage of every Presidential inauguration from the time the play’s set to the present, we’re well prepared for the response that’s required for the incumbent.

Network by Lee Hall, based on the film by Paddy Chayefsky, is booking in repertory until the 24th of March at the National Theatre’s Lyttelton (returns, day seats and rush tickets only.)