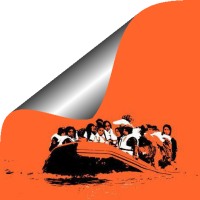 The Oresteia is the only complete surviving Aeschylus trilogy, and consequently his most-performed work, but a couple of other individual plays of his are also extant; The Suppliant Women is the first in another sequence the rest of which has been lost. Of course, the same can be said of many of the plays by later writers that are still performed regularly, but Ramin Gray’s production, which goes right back to theatre’s early roots, quickly shows why this one might be seen as less ripe for reinvention than others. The titular women, a community chorus led by Gemma May Rees, are the Danaids, the Egyptian daughters of Danaos (Omar Ebrahim.) They have been ordered by the king Aegyptos to marry their first cousins, and they’ve fled Egypt with their father to escape the forced marriages. They trace their lineage to Argos, and one of Zeus’ various bestiality-themed extra-marital affairs, so that’s where they’ve sailed to seek asylum.

Lizzie Clachan’s bare brutalist set, just a square paved in breeze-blocks, is surprisingly evocative. It’s a temple just outside the city walls, where the women have come for sanctuary while they plead for safe access to Argos itself. 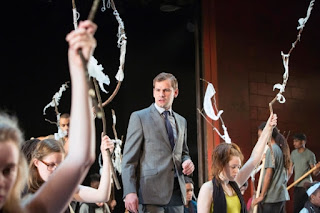 The story is simple, even by Greek tragedy standards: King Pelasgos (Oscar Batterham) arrives to hear their case, and is conflicted between his conscience wanting to help the women, and the fact that doing so will probably start a war between his own state and Egypt. (Spoiler alert – in the lost plays of the trilogy, it does. Basically, if it all looks like everyone’s getting a surprisingly happy ending for a tragedy, it’s because what we get here isn’t actually the ending.) He sides with his conscience, and convinces his people to vote in favour of granting the women citizenship, but there’ll be one more encounter with their Egyptian cousins before they can join the people. 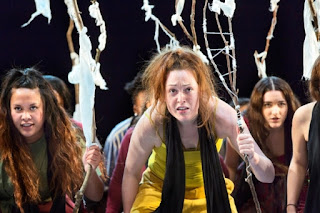 Any topicality in the issue of migrants seeking asylum, as well as that of women threatened with unwanted sexual advances by men (a tricky one to watch dispassionately when the director is the latest to be accused of them,) is laid out enough in the text itself and David Greig’s English version that it doesn’t need to be laboured in the production itself. Instead Gray focuses on recreating something like what the play would have originally been, an extension of religious and civic duty. This is highlighted from the start when Ebrahim introduces the play with the rituals that would have preceded a performance two and a half millennia ago: An appropriate dignitary (tonight a classics professor) thanks those who helped fund the production before offering a libation of wine onto the stage. 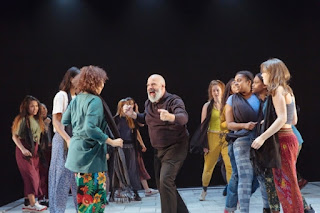 The professional actors are committed but most of the weight of the production falls on the community chorus, drilled by vocal coach Mary King and choreographer Sasha Milavic Davies. They speak-sing their lines to music by John Browne, dancing and, in one of the more memorable scenes, dropping dirt onto the floor that eventually forms the image of that cow that Zeus fucked that one time, who is also their great-great-nan. In a way, the play is like an extended prayer, and in a surprising comparison the production reminded me of Mr Burns: Where that play sees storytelling turn into ritual, The Suppliant Women takes us right back to the start and the way theatre developed out of ritual in the first place; the play feels like it occupies that moment where one turns into the other, which makes it a fascinating experience to watch.

The Suppliant Women by Aeschylus, in a version by David Greig, is booking until the 25th of November at the Young Vic.