Theatre review: A Clockwork Orange (Action To The Word/Soho) 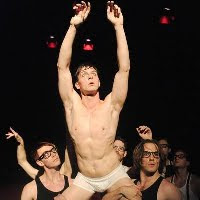 Certain shows you expect to have multiple London productions in a year, but they tend to be your Shakespeares and Chekhovs. Anthony Burgess' own stage adaptation of his most famous book, A Clockwork Orange, would seem less likely. But following a production at the Arcola earlier in the year that I wasn't convinced by, Action To The Word's Edinburgh hit rocks up at Soho Theatre as an unlikely Christmas offering. Burgess' notes for the 1986 adaptation are rather bizarre, and his apparent lack of enthusiasm for the project makes it unsurprising it originally flopped. Having knocked out the novella over three weeks in 1960 when he thought he was dying, he remained frustrated that it became his signature piece above works he considered superior; and only wrote his own stage adaptation to stop other people from doing so, and to make sure it had his original ending (which was ditched from US editions of the book.)

With this unprepossessing genesis in mind it's not surprising that director Alexandra Spencer-Jones has, although sticking pretty much to Burgess' script, felt free to liberally impose a new identity on the piece (crucially, one which pays no lip service to the film.) The story remains the dystopian vision of Alex (Martin McCreadie,) teenage leader of a violent group of droogs, who after one vicious spree too many is sent first to prison, then to extreme aversion therapy to wipe out his ability to do evil. But along with that go his free will, ability to appreciate beauty, and even survive in the world he's released back into. 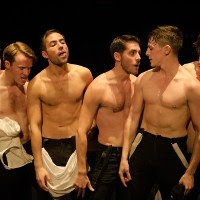 Spencer-Jones' take on the play features an all-male cast and frequent musical interludes (other than the inevitable Beethoven, she chooses her own soundtrack of mostly recent pop-rock.) Where "movement" ends and dance begins is one of those questions that could be up for endless discussion, and I would argue that what we get in this Clockwork Orange is the latter. (I'm taking the fact that the cast all wear ballet shoes as backing me up on this.) And it's an incredibly physically impressive performance from the cast of nine, eight of whom play multiple supporting roles both male and female (and a couple which I suspect originated as female but got their pronouns changed.) For a story whose central character is addicted to the most appalling violence, the result is perhaps rather short on shock and menace, but on the other hand more entertaining than the story has any right to be.

One bonus of the beautifully-choreographed (by Hannah Lee) movement is that the half-English half-Russian futuristic slang Alex and his droogs speak in is less alienating in the initial stages than usual. But again, you could argue that it's meant to be alienating at first. 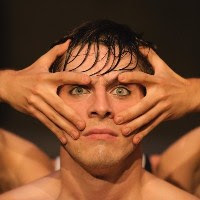 With nine predominantly young, frequently-topless dancers manhandling each other for 85 minutes the word "homoerotic" has preceded this production, and in a programme note the director argues that the all-male cast was meant to bring "a whole load of testosterone" to the stage, and the piece isn't to be interpreted as gay or straight. The piece itself would seem to disagree though, and rather than a denial I would have expected the notes to feature thanks to Certain Specialised Websites for the inspiration. There's a couple of explicitly gay couples (one in Wham-style "Choose Life" T-shirts,) while Alex himself celebrates a satisfying bout of ultra-violence by shoving his hand down the front of one of his droogs' pants and wanking him off to completion. When he's captured, his punishments include some light nipple torture (maybe that's why they're so perky; McCreadie must need to be careful not to take anyone's eye out in the front row.) And I'm sure there was another of those pronoun-changes at the end, seeing Alex settle down with a nice young man. Basically the publicity photos barely skim the surface of the homoeroticism in the show. (Besides "a whole load of testosterone" and "gay gay gay gay gay!" can happily coexist, thankyouverymuch.) 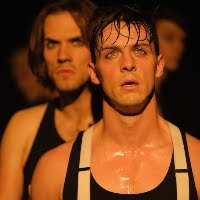 Subtlety isn't really part of the story, neither is it part of the production's aesthetic, and I must admit some of the mugging and gurning from the supporting cast did get tiresome pretty quickly. Martin McCreadie though is perfectly cast in the lead role, not just preposterously fit and handsome but also constantly drawing the attention with a charismatic turn that fulfills the criteria of the "big" performances required, without tipping over into ham.

For all the spitting, kicking and sweating there's something beautiful about this show, and although it makes it worth seeing that's not necessarily a good thing - some of the cruelty just doesn't come across, and for all that Alex is horribly abused in the second half of the play, the audience's sympathy for him comes a bit too easily if the full extent of his psychotic viciousness in the first half has been partly masked by the impressive movement work. 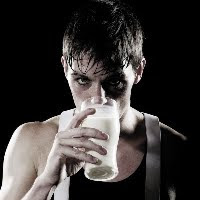 But A Clockwork Orange does certainly introduce a couple of names to watch; McCreadie inevitably owns the show, but according to the programme notes Action To The Word specialise in Shakespeare, so I'd also be interested in seeing if Spencer-Jones brings this movement-heavy aesthetic to his plays as well.

A Clockwork Orange by Anthony Burgess is booking until the 5th of January at Soho Theatre.