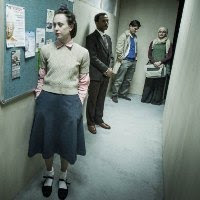 In 1948-9, the Islamic scholar Sayid Qutb (Jude Akuwudike) spent 18 months studying at a small American university. Already a much-published authority, the reasons the middle-aged Egyptian joined the freshmen in the first place seem a bit nebulous, but on his return to Egypt his writing became increasingly extreme (a quick Google search of Qutb sees him described as "the man who inspired Bin Laden") and he became a leading figure of the Muslim Brotherhood, acquiring a martyr's reputation after his arrest and execution. In a present day UK university, Philip (Daniel Rabin) is a lecturer finishing a book on Qutb, when he takes on new postgrad Layla (Laila Alj,) ostensibly writing her doctorate thesis on the same subject. Steve Waters' new play Ignorance/Jahiliyyah, the latest to premiere at Hampstead Downstairs, jumps between the two connected stories as Layla presents some documents that contradict the popular opinion that Qutb became radicalised after his return to Egypt, and suggests that his experiences in America simply confirmed a hatred of Western values that he already held.

Nathan Curry's slightly-too-slow production is set in an in-the-round design by Georgia Lowe, a grubbily timeless academic office that serves for both time periods - and holds a small but nicely symbolic change as we return from the interval. 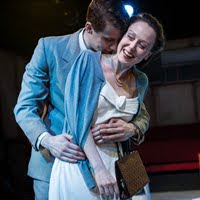 It features some strong performances, notably from Scarlett Brookes as Myrna, a comparatively liberated student who proves instrumental in the image Qutb takes back with him of the US. Against the protestations of her hot but meat-headed boyfriend Wayne (Andy Apollo,) she strikes up a friendship with the Egyptian whose different world-view she finds fascinating. The 1940s sections are the strongest in the play, Akuwudike and Brookes' relationship sensitively played, Apollo's douchebag more intimidated and a step behind the times than an out-and-out bigot (the setting sadly means he's fully dressed throughout; a shame, since he was Taron Egerton's understudy in The Last of the Haussmans, so presumably fills out a speedo well.) A couple of gawky lecturers (played again by Rabin) are more enthusiastically accepting of the international student, although perhaps a bit too much so for the time and place. 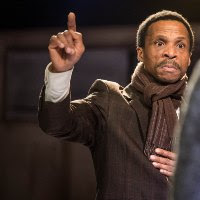 The modern-day scenes also hold the interest in the first half, if less so, as Layla is a problematic character; her open idolatry of Qutb soon suggests she's not writing a piece for genuinely scholarly reasons, and despite late revelations about her past that lend a degree of sympathy and background to her beliefs, her utter single-mindedness becomes frustrating - dramatic conflict can only develop so far when one character might as well be a brick wall.

For the most part I found Ignorance/Jahiliyyah to be perhaps a bit flabbily written but not without its points of interest. The second act is a bit less involving despite events coming to a head in both timelines. One problem with a central mystery whose details are, by the very nature of the story, hard to pin down, is that as the play's final scenes circle around a definitive answer that isn't there, the conclusion feels unsatisfying. 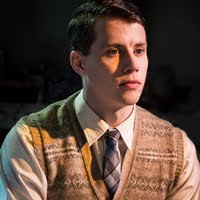 Philip's clinging to the hope that Layla may be able to develop the ability to take an academic distance from her subject matter (moments after she's threatened him with a fatwa if he publishes anything other than a hagiography) also feels like an unearned attempt to give her a bit of a redemption arc. Ultimately my interest was piqued by the subject matter (enough that I found the half a dozen or so interval walkouts surprising) but not as much as Waters perhaps hoped.

Ignorance/Jahiliyyah by Steve Waters is booking until the 15th of December at Hampstead Theatre Downstairs.