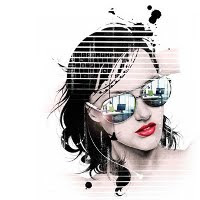 I'm sure this'll come as a complete surprise given how purer-than-pure my reviews are, but the blog stats do show that people sometimes get here after Googling for some pretty dirty stuff. How disappointed they must be to find posts that, at most, might happen to give a description of someone's genitals. In passing, like. I imagine the amount of disappointed punters will only increase now that my text includes the title of Lucy Kirkwood's new play at the Royal Court, NSFW (for the benefit of people who don't use the internet - HOW ARE YOU READING THIS? - the acronym for Not Safe For Work, or stuff, usually of a mucky nature, you wouldn't want your boss catching you looking at on your computer screen.) Although in the case of the workplaces in Kirkwood's play, those kind of images are exactly what you're supposed to be looking at at work, because we're in the editorial offices of two - apparently - very different magazines.

We open in the office of Aidan (Julian Barratt,) editor of a lads' magazine, whose weekly diet of topless girls and juvenile dares is supplemented by articles they know perfectly well are terrible, and are just there so men don't feel embarrassed to buy the magazine. Aidan's laddish, aggressive workplace comes under fire when it turns out they've accidentally published a topless photo of an underage girl, and her father Mr Bradshaw (Kevin Doyle) wants them held to account. 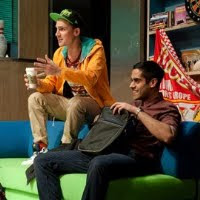 Simon Godwin's production sets up the dynamic effectively, with the staff constantly under pressure to impress their boss and conform to the magazine's unreconstructed image. Trustafarian Rupert (Henry Lloyd-Hughes) doesn't seem to need the job, but dresses the part and puts up with endless humiliating assignments. Token female employee Charlotte (Esther Smith) has to be twice as vulgar as the men to fit in. Only junior reporter Sam (original History Boy and Big Favourite Round These Parts Sacha Dhawan) seems to still think there's a line to be drawn when he's asked to turn his proposal to his girlfriend into a comic article - an attitude that perhaps explains why he's still at the bottom of the food chain at the publication. When Aidan has to take on Mr Bradshaw in the second scene, he uses the casual sexism that's his bread and butter and turns it into a weapon against the girl's father. 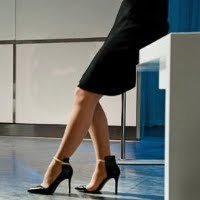 But it's the third and final scene where Kirkwood really makes her point. We follow Sam a few months down the line to an interview with Miranda (Janie Dee in heels Felix Baumgartner would be afraid to jump off the top of,) editor of a women's magazine. Tom Pye's set turns from roomful of toys to sleek, airy white office with billowing curtains in the background (and impressive though the Royal Court's trademark lightning-fast complete set changes behind a curtain are, it's nice to see a set constructed like a puzzle get spun around and overhauled in front of us for a change.) But these superficial differences are just that - Miranda uses her sexuality on Sam throughout, and for all the protestations of being on her readers' side, is determined to remind them at every turn that they're physically imperfect: The main skill she wants Sam to demonstrate in his interview is the ability to highlight flaws on supermodels' bodies. (There's another surprising similarity with the lads' mag, but I won't spoil the joke.) 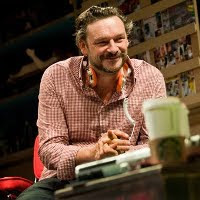 NSFW has a lot of good laughs, as well as its share of cheap ones. This bunch of unsympathetic characters are, sadly, all too easily believable as the people behind the accepted standards of body image. And Kirkwood's point about surface-level feminism (the final image of Dee makes its own strong, if somewhat heavy-handed, commentary) and how if men objectify women, other women objectify them just as much if not more, is one that's hard to disagree with. But for all that I agree with what Kirkwood's saying, and enjoy the way she says it, I kind of wish she's had a little bit more to say. I didn't feel as if I'd seen any particularly interesting insight on the subject matter. So NSFW is a little bit unsatisfying in the final analysis, but entertaining all the same and featuring plenty of good performances.

NSFW by Lucy Kirkwood is booking until the 24th of November at the Royal Court's Jerwood Theatre Downstairs.