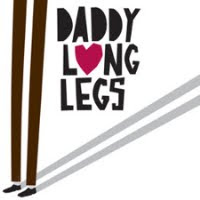 The publicity for the second show at the new St James Theatre has heavily plugged John Caird as the co-director of the original Les Misérables1, although anyone approaching Daddy Long Legs expecting blood and rebellion will be disappointed. In fact getting a bit hot under the collar might be too much to ask of this adaptation of Jean Webster's novel, which Caird also writes the book for with songs by Paul Gordon. It's 1908 and Jerusha (Megan McGinnis) is the oldest girl in a grim orphanage, when hope comes in the form of a mystery benefactor who pays for her college tuition. In exchange "Mr Smith" (Robert Adelman Hancock) asks only that Jerusha write him regular letters, although he will not reply to them or reveal his true identity. With only these two characters on stage, the story plays out through the letters Jerusha sends to the man she's nicknamed "Daddy Long Legs."

With the 30-something Mr Smith being much younger than the elderly "Daddy" Jerusha has imagined, it's not hard to see where the story will go, and indeed soon the millionaire is falling for the orphan he sponsors, and arranges to get to know her without revealing his connection to her. This predictability is just one of the issues I had with a pretty bland show that you could leave 20 minutes in with a pretty accurate idea of everything that happens in the remaining two hours. 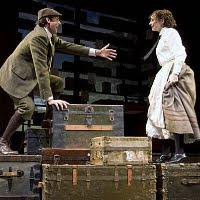 It's a rather insipid story only slightly livened up by Jerusha's increasing sings of independence, both as a budding suffragette and Socialist, and in standing up to her wealthy friend in both his alter egos. And Gordon's workmanlike songs are nothing to get too excited about either, with barely a hummable tune between them. Of the show's two American stars, McGinnis is likeable but terribly saccharine, and Adelman Hancock seems to have a very limited vocal range, he struggled with songs that aren't particularly loaded with big notes to start with. Tonight was fairly well-attended but it turned out to be a sponsor evening and there were still enough gaps near the front that I got an upgrade, so it remains to be seen if the St James' ambitious/foolish pricing structure (they're asking up to £55 for premium seats for an unknown, small-scale musical, with no "name" stars, in a new theatre in a back road in Victoria) will seem such a wise idea in retrospect; for my money, this dull couple of hours isn't worth anything close to what they're asking for it.

Daddy Long Legs by Paul Gordon and John Caird, based on the book by Jean Webster, is booking until the 8th of December at the St James Theatre.

1The other main marketing boast has been of the production receiving standing ovations on its tour of America prior to London. Which is all fine unless you know that standing ovations are as automatic a piece of theatre etiquette in the US as regular ovations are here. They might as well brag that nobody threw rotten eggs at the stage.
Posted by nick730 at 22:45