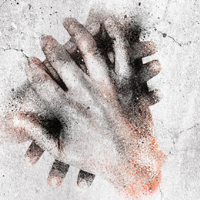 Donmar Trafalgar's final season has an overall theme of lesser-known foreign language classics, presented in new adaptations by well-known playwrights. First of these is Penelope Skinner, who writes a version of Aleksei Arbuzov's The Promise (from a translation by Ariadne Nikolaeff.) The Soviet love triangle spanning 18 years, is a showcase for director Alex Sims. In 1942, during the Siege of Leningrad, 17-year-old Marat (Max Bennett,) following the rest of his family's deaths, returns to their tiny flat only to find that neighbour Lika (Joanna Vanderham,) whose own home has been bombed, has moved in. Starving and freezing, the two pool their meagre resources and become each other's support network, until a few weeks later the even worse-off Leonidik (Gwilym Lee) arrives on their doorstep and they decide to nurse him back to health. As post-war Russia starts to take shape, we rejoin them at various points when the three reunite. 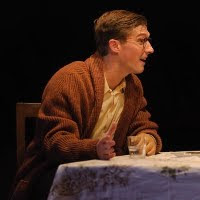 The actors do a good job of bringing to life the complex three-way relationship, Lika having to choose between the idealistic (to the point of occasionally being a fantasist) Marat, who returns from the war covered in medals; and the frustrated poet Leon, who returns with an alcohol problem and a missing hand.

Skinner's translation is accessible and witty, and Sims' direction is good at hitting all the right emotional notes - although like many a director, blocking for the Trafalgar 2's thrust seems to have defeated him (my view was fine from the centre block, but I suspect anyone in the seating block on audience left would have spent an entire crucial scene looking at the actors' backs.) There's some nice little unspoken touches during scene changes though, that give us further information about the characters' different priorities. 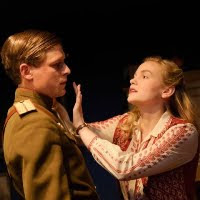 The play has an interesting take on how the Communist ideal has to adapt in the face of day-to-day reality, and the ways in which youthful hope doesn't necessarily have to be lost to adult pragmatism. The Promise isn't essential viewing, but it's got its interesting moments and is given a good account by the creatives here.

The Promise by Aleksei Arbuzov in a version by Penelope Skinner is booking until the 8th of December at Trafalgar Studio 2.