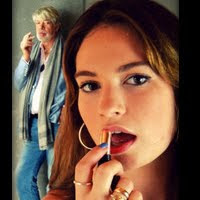 Russell Bolam, who directed Shivered, returns to Southwark Playhouse's main house to tackle Chekhov, bringing with him one of that show's stars, Joseph Drake. The play is my favourite Chekhov, The Seagull, and for this modern-day version Bolam uses a first foray into adapting classic texts from rising playwright Anya Reiss. The setting is an island that may or may not be the Isle of Man, and celebrated stage actress Arkadina (Sasha Waddell) is staying for the summer with her elderly brother Sorin (Malcolm Tierney.) Arkadina's son Konstantin (Drake) feels as if his mother resents him, and tries to get out of her shadow by writing plays, the first of which will be premiered for an exclusive audience of family and friends, and star Nina (Lily James,) the neighbour he's in love with. When this performance goes awry, it provides a turning point for Konstantin's rather fragile mental state, and sets off a tragic chain of events.

So far this year I've seen opposite extremes of how to stage the Russian playwright's work: The current West End Vanya is a big, soulless period piece, while in the autumn Three Sisters was brought up to date in an expressionistic staging. This Seagull sits somewhere between the two, with Reiss' text updating the action to the present day, but a fairly naturalistic staging from Bolam. The updating seems not to have been to everyone's taste, but I didn't have a problem with it, Reiss' mentions of mobile phones and laptops largely kept to why these can't be used to avoid some of the characters' miscommunications (some day mobile phone networks will be completely reliable, and writers will have to find something other than "no signal" to create drama. And horror movies will be completely buggered.) 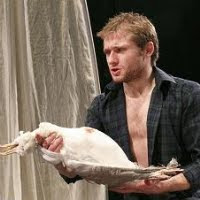 Drake is very good, his slight stature making him a particularly vulnerable Konstantin. Perhaps it's to offset this that, to start with at least, Waddell's Arkadina seems less monstrous than I'm used to. (Rob, who was also there tonight, and also has a couple of previous Seagulls under his belt, agreed that it seemed like this Arkadina didn't interrupt her son's play at the start quite as often or as callously as usual.) This may actually work in the play's favour though, as having held back in the first act means she can still surprise us with her casual and unthinking cruelty towards her son, even when his vulnerability has so recently been exposed by his suicide attempt at the end of Act II. The play's emotional power is well-served here, but so is the humour - this play always seems to best justify Chekhov's labeling many of his plays as comedies (my personal jury's still out on whether he was actually being sarcastic.) 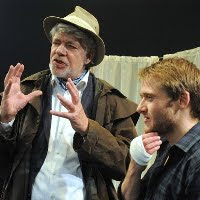 There's some "name" casting in the production as Matthew Kelly plays Dorn, the local doctor everyone seems to expect wisdom from, and who in Kelly's interpretation winks and smiles his way out of answering their awkward questions and having to share too much of himself. Michael Beckley provides some of the show's best comic moments as the gruff estate manager Shamrayev, although Julia St. John's warm, grounded Polina feels underused. As Arkadina's new younger lover, the bestselling writer Trigorin, Anthony Howell's low-key performance has mixed results; sometimes his under-the-breath line readings as the pneumatic Nina comes on to him work to strong comic effect, but sometimes it just means he's rather mumbly and hard to understand. Emily Dobbs' emo look seems a good way to bring Masha to the present day, although her deliberately tying herself to an unwanted marriage with Ben Moor's Medvedenko feels an anachronism too far. 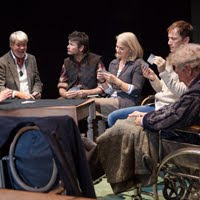 Where, for me, Reiss and Bolam's updating of the setting makes the most sense is in the culture of celebrity that Arkadina's household celebrates, and nowhere more so than in Nina's romantic fixation with the uncharismatic Trigorin. As she makes repeatedly clear, it's his fame that sends James' Nina into a trance-like state, her opinion of his writing coming a distant, only occasionally-mentioned second. Undoubtedly a closer look would bring up a number of reasons why The Seagull's events wouldn't actually take place in the same way in the present day, but personally I found the production gripping enough for it not to matter. With Shakespeare and other home-grown classic playwrights regularly given high-concept productions, I for one am pleased to see a trend towards also taking Chekhov out of an exclusive context of white linen suits and samovars.

The Seagull by Anton Chekhov in a version by Anya Reiss is booking until the 1st of December at Southwark Playhouse.