Theatre review: The Dark Earth and the Light Sky 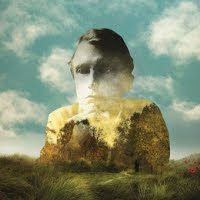 I'm all for giving people second chances, and at £8 for the Almeida's behind-a-pillar obstructed view seats, it's not as big a gamble as it might be. Because while the National's adaptation of Frankenstein was one of last year's biggest theatrical blockbusters, you'd be hard pushed to find someone who thought Nick Dear's script (o we are poor but happy and in love i do hope a monster doesn't suddenly turn up and kill us how tragically ironic that would be) was a factor in its success. Dear's new play has to make do without the bells and whistles of the Olivier's stage, star casting and direction. Instead The Dark Earth and the Light Sky rocks up at the Almeida with a pretty bare stage, Bob Crowley's design giving us an earth-covered playing area, conjuring up perhaps the native British soil in whose defence the early 20th century poet Edward Thomas enlisted in WWI, ultimately leading to his death.

Dear's play shows us three of Thomas' (Pip Carter) most significant relationships: With his wife Helen (Hattie Morahan) and their friend Eleanor Farjeon (Pandora Colin,) a minor writer who's in love with him. And, as the play begins, Thomas meets the legendary American poet Robert Frost (Shaun Dooley,) still virtually unknown at this point, who encourages him to move on from reviewing poetry to writing his own. 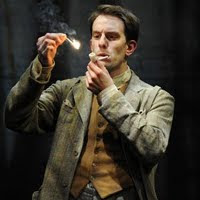 The Dark Earth and the Light Sky doesn't quite have Frankenstein's feel of the author having headbutted a keyboard and staged the results, but it's a disappointing piece of work in other ways. Thomas would probably be called bipolar nowadays, but Dear struggles to convey anything of his more positive side. The man we see spouts misogyny and anger, showing nothing but contempt for his long-suffering wife and their children, and her devotion to a marriage he seems to have given up on has to be taken as read. Dooley's Frost comes across as a warmer, more likeable figure, but I found myself judging him for his affection for the Welsh poet, spending all his time in the UK going on long walks with him and chuckling as he spouts bile. Narration can sometimes work in plays or it can seem like a cheap get-out, and sadly here it feels like the latter, as Helen, Eleanor and Robert all take turns suddenly breaking the fourth wall and addressing the audience from the perspective of many years later. I think the idea was to have Thomas seen through these three people's different points of view, but it doesn't come off cleanly at all. Jan thought cutting to mentions of what would happen later in the story was meant as reassurance that something interesting would happen eventually. 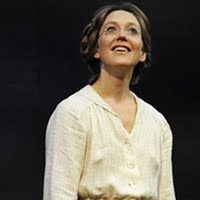 By the interval I had no idea what could have drawn Hattie Morahan to the role of Helen, who in her early scenes with her husband is a bit of a doormat and seems to have remained a mousy figure in the narration from years later. She does have a few bursts of bolshyness near the end of the first act but they seem to come out of nowhere. In the second act she takes on a lot more, with her character variously as the free spirit whom Edward fell for, later coming unhinged, becoming aggressive and crumbling in mourning. Morahan attacks all these different Helens equally well but that's what they feel like, different Helens: Clearly this is meant as a portrait of a woman who was mentally unstable as well as having a lot to deal with in her life but the way the play's structured means they all come out of context and never seem to add up to a character; and as with the narration, Richard Eyre's production struggles to make the disjointed storytelling feel organic. 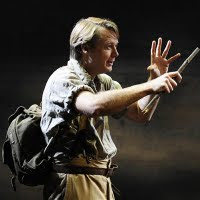 Jan came along to this out of an interest in Frost's work, although he knew nothing about Thomas (I knew the name as someone who's lumped in with the WWI poets but not much more) but I don't think either of us came out of it feeling we knew much about either. Tonight's audience seemed reasonably appreciative and the show's garnered four-  and five-star reviews so clearly someone's seeing its charms, but beyond the cast's efforts I can't say that I did.

The Dark Earth and the Light Sky by Nick Dear is booking until the 12th of January at the Almeida Theatre.