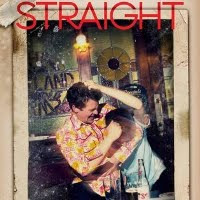 There's a definite kinky theme developing to this week's theatregoing (how traumatic for me, I'm sure you're all thinking, given the famously prim and proper nature of my reviews.) After last night's definitely-not-gay shenanigans, tonight a play that takes a look at what it means to be Straight, by taking the very notion to its extreme. DC Moore has shown an ability to write not only powerful but quite varied plays with the likes of The Empire, Honest and The Swan (varied, but if they can be set in/actually take place in a pub, so much the better it seems.) This time he's taken as his inspiration a fairly recent film, Lynn Shelton's Humpday, to look at the platonic relationship between straight male friends, and in the process use it as a prism to look at men and women's relationships as well. 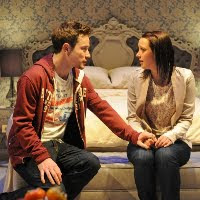 Stuck in a tiny flat after the property market collapsed, married couple Lewis (Henry Pettigrew) and Morgan (Jessica Ransom) are settled enough to be considering having kids. But heralded by the sight of his cock being shoved through the letterbox (we were in agreement that it was probably a prosthetic, so no scrolling alerts here) is the arrival of Waldorf (Philip McGinley.) Lewis' best friend from university, Waldorf's year of travelling the world has stretched out to seven years, and he's back to ask Lewis to honour a long-forgotten promise to let him crash for the night. When Waldorf brings along a one-night stand, Steph (Jenny Rainsford,) Lewis' sense of sexual adventure is challenged and, drunk and stoned, he agrees to have sex with Waldorf on camera for a hippyish amateur porn festival. But even when they sober up, neither of the two straight friends is willing to be the first to back down and seem the less sexually open, and with the hotel room booked and the date getting nearer, there's also the little matter of Lewis telling his wife what he's planning. 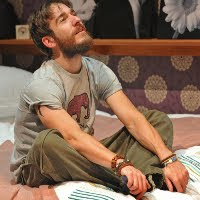 First and foremost Straight is a very funny play, peppered with great one-liners and a spiraling comic situation which Richard Wilson's production (originally seen in Sheffield) manages to keep believable while drawing out all the humour. McGinley and Pettigrew make an amusingly contrasting pair, the former's apparent bohemian attitude masking his own insecurities, the latter's neuroses on the surface but the unusual situation he's got himself into perhaps letting out some of his own demons. But without making a big deal of it Moore also creates quite a moving portrait of the characters, especially the married couple at the centre of it all. Their commitment to each other seems paradoxically to be strengthened by their thoughts about straying, and albeit in an extreme way the proposed sex tape opens up a lot that they've been holding back. Meanwhile the confrontational surface of Lewis and Waldorf's relationship barely disguises their importance to each other despite seven years out of each other's lives. And perhaps most interesting is the lightness of touch with which Moore treats the grey areas of Lewis' sexuality. 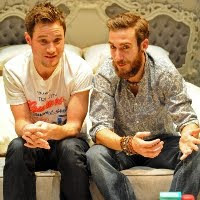 After the interval James Cotterill's set has undergone a pretty impressive transformation from cramped flat to palatial hotel room where the two friends have agreed to do the deed. Big Favourite Round These Parts Pettigrew doesn't actually get to display just how big his favourite parts are but the two do spend much of the second act wandering around the room nervously in just their boxers, and both look like they've been working out.

Not having seen Humpday I don't know if Straight is a faithful adaptation, or more of a riff on that film's basic storyline, but taken on its own it feels full of the writer's personality and comic style. Funny, sexy, moving and intelligent, it sees the Bush finally get its mojo back and is highly recommended. (And although it's not actually set in a pub, the theatre have at least got into the playwright's spirit by advertising the show on beer mats.)

Straight by DC Moore, based on Humpday by Lynn Shelton, is booking until the 22nd of December at the Bush Theatre.