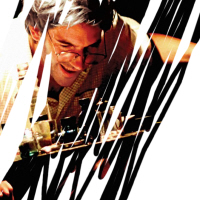 The abstract painter Roger Hilton isn't widely remembered nowadays, and evidently wasn't famous enough during his lifetime to be invited onto Desert Island Disks, either. This was presumably a sore point for him as he'd got his list of disks and luxury items ready, and one thing Eddie Elks' Botallack O'Clock does is rectify this situation. The title comes from a poem W.S. Graham wrote about Hilton after his death, describing the time and place where the artist did most of his late work: Confined to his bed after a lifetime of alcoholism, in a bedroom/studio at his house in Botallack, Cornwall, waking up to paint in the middle of the night. This is how Elks' play opens, with Hilton (Dan Frost) waking up and, after scrambling around for a drink and a roll-up, muttering advice to himself as to how best to start that night's artwork. After failing to tune into a station, the Radio (George Haynes) starts speaking to him directly, interviewing him for Desert Island Disks.

The Radio voice is inexperienced, though, and Hilton irascible, so he ends up dominating the interview with his reminiscences and theories about art - Elks has taken much of his script directly from the artist's letters and notes. 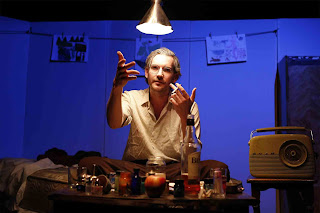 This means Botallack O'Clock ends up a short and bizarre character piece, using a dreamlike atmosphere (Christopher Nairne's lighting is a major contributor to this feel of the middle of the night with only Hilton's thoughts to keep him company) while Frost's fruity-voiced performance as the artist presents him as a difficult but likeable eccentric. I'm not sure how, as the poster tells us, this is a black comedy about Hilton's life and death (unless in the sense that we're inferring his death from his obvious bad health,) and not all the play's surrealism worked for me (the appearance of a flirtatious dancing bear is a bit of a tonal jump) but for the most part this works as a quirkily atmospheric dip into the mind of a wilfully eccentric artist.

Botallack O'Clock by Eddie Elks is booking until the 6th of February at the Old Red Lion Theatre.