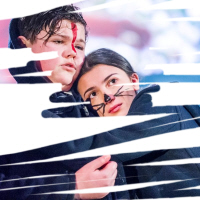 A second night in a row for me of kids in war paint - a quote on the website even calls Simon Stephens' Herons "an inner-city Lord of the Flies." I think this time around the cast actually are 14 or thereabouts, director Sean Holmes having found some of them from his Bugsy Malone (presumably this production's relatively short run gets around the child labour laws.) The setting is probably a London suburb, near a river or canal where Billy (Max Gill) and his father Charlie (Ed Gaughan) come daily to fish. But it's also where, almost exactly a year ago, Charlie discovered the body of a murdered girl, a classmate of his son's. Overweight, quiet and though apparently good in school, not street-smart enough to spot a bully targeting him, Billy is approached by the vicious Scott (understudy Louis Walwyn,) who says he has a message for his father.

Scott's older brother was one of the girl's murderers, and Charlie may or may not have been the one who gave evidence that got them sent to prison; Scott has some threats of revenge to deliver on his brother's behalf, as well as some violent intentions of his own towards Billy.

This is a revival of Stephens' third play, dating from 2001, but unlike his following play Port it's neither particularly naturalistic nor, despite its bleak subject matter, does it tend towards misery porn. Instead it's got something of the lyrical, elliptical style of his more recent work, teasing its story out and still leaving quite a lot of gaps for us to fill in ourselves (why have Billy's siblings stayed with their mother [Sophie Stone] while he's gone to live with their father?) As such it demands a lot of the director, and in this case the designer in particular: Hyemi Shin has taken the fishing theme and created a playground in the shadow of a dam, the whole stage filled with water up to ankle height (the first few rows of the stalls will get splashed.)

It provides the chance for a dramatic, almost literal opening of the floodgates when Billy snaps under pressure, as well as adding to the overall surreal feel of the production. As Billy narrates his story to his new friend Adele (Sophia Decaro,) despite the story's darkness and occasional bouts of extreme violence the prevailing sense is of an eerie calm. Holmes gets focused performances out of his young cast (Walwyn, who also understudies the very different role of Billy, particularly confident.) Impressive and much more gently hopeful than the bleak subject matter might suggest.

Herons by Simon Stephens is booking until the 13th of February at the Lyric Hammersmith.