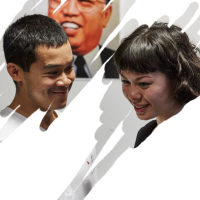 Hot on the heels of You For Me For You, which looked at the more surreal elements of the North Korean dictatorship through a fantasy lens, In-Sook Chappell's subject is the restrictions on free expression and the country's rigid class system, through the medium of an old-fashioned star-crossed love story. Spanning three decades, P’yongyang introduces Chi Soo (Chris Lew Kum Hoi) and Eun Mi (Anna Leong Brophy) as teenagers, when he's the handsome and popular jock and she's mousy and reserved, but both share the same ambition: To be accepted into the performing arts high school, and eventually write or star in the propaganda-filled films shown in their local cinema. But their situations are quickly reversed when the school does a background check and Chi Soo discovers what his parents (Daniel York and Lourdes Faberes) have been keeping from him: His father was originally from South Korea, which makes him and the next three generations of his family part of the "hostile class," not to be trusted. While "core class" Eun Mi gets a new life in P’yongyang, Chi Soo's only option is down the coal mines with his father.

This also means the couple are not allowed to marry, but over the years fate conspires to keep bringing them together; and while Chi Soo's prospects are limited, Eun Mi's life as an actress doesn't prove all she'd expected either. 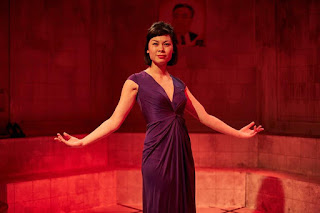 Chappell presents us with two young characters with utter belief in the superiority of North Korea and everything they've been taught about their leaders so their story, as they face the harsh reality, feels less like one of brainwashing and more like a loss of religious faith. 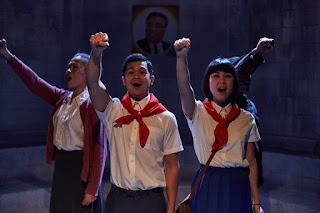 With good support from York and Faberes in a variety of roles, Lew Kum Hoi and Leong Brophy make a central couple that's endearing from their opening scene meeting outside a cinema. Inevitably the story takes much darker turns - Chi Soo losing his family to the famine of the 1990s, while Eun Mi finds that popular young actresses really do get private "acting lessons" from Kim Jong-il himself, and that in reality they're exactly what you'd expect - but Chappell's play and Chelsea Walker's production manage to hold onto a lighter touch, helped by the appealing leads. 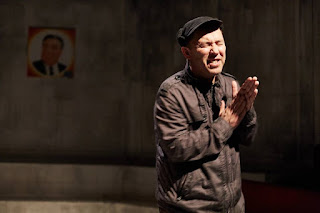 Dominated by filthy tiled walls, Max Dorey's set design is otherwise very minimal, allowing Walker to keep the action moving briskly and not let up in energy. There's a bitter edge to the note of hope the play ends on - we leave the story in 2011, with Chi Soo and Eun Mi optimistic that the death of Kim Jong-il will see the whole regime come crashing down - but despite the hardships it puts its characters through this hope remains a defining characteristic of the play.

P’yongyang by In-Sook Chappell is booking until the 30th of January at the Finborough Theatre.