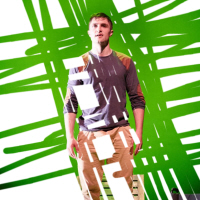 The war in Afghanistan isn't a new subject for theatre, but there's always new ways of looking at something and that's what Owen Sheers' verse/dance piece Pink Mist does. John Retallack and George Mann's production comes to the Bush from Bristol, where the play is also set, as three teenagers with dead-end prospects see a way out in the army. Carrying the bulk of the script is narrator Arthur (Phil Dunster,) who's the first one to sign up and persuades his two best friends to join him: Taff (Peter Edwards) doesn't take much convincing but it's a harder sell for the youngest of the trio, 17-year-old Hads (Alex Stedman.) They do both end up joining Arthur in basic training though, and eventually on to Afghanistan, and the fact that Arthur was the one who convinced them ends up haunting him as their initial good luck sours, and a land mine sends Hads home with both his legs amputated.

The first act follows his fate and Taff's, the latter returning with severe injuries and PTSD after witnessing friendly fire vapourise four of his mates - the titular Pink Mist. 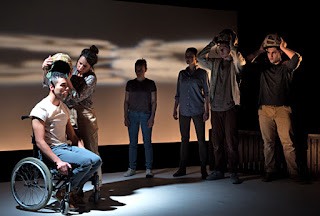 After the interval we see what the war's lasting effects are on the leader of their old gang as Arthur is the last one left fighting; a combination of his own traumatic experiences and his guilt over his friends leaves him mentally scarred and taking increasing risks. And Pink Mist is very much the story of these three men - where most plays about the recent Middle Eastern wars are overtly political, for the most part this allows the story's wider significance to be inferred. 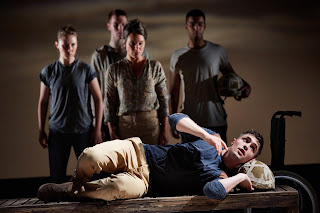 As well as the intimacy of the story the play's USP comes in the way it's told, directors Retallack and Mann matching the rhythms of Sheers' verse with a performance style that jumps from more naturalistic movement to jerky, expressionistic dance. Dunster is a charismatic, intense and compelling lead, as well as the living personification of the phrase "dat ass tho" - at times it's downright distracting. (He also puts in an early bid for this year's Best Nipples Award: He never actually takes his shirt off but they seem to be constantly attempting to escape from it.) 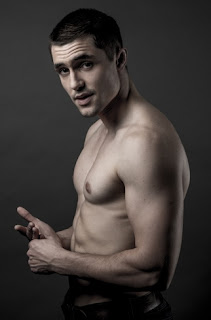 Happily, a Gay Times feature has sought to correct this oversight

The six-strong cast is completed by Rebecca Hamilton and Rebecca Killick as Arthur and Taff's girlfriends and Zara Ramm as Hads' mother, the whole cast onstage throughout forming a chorus to the main action. While there's a marked effort this year to make women more visible on stage, the opposite is the case here, but I think it's deliberate: The women are largely relegated to the background while the boys take centre stage for their war games ("Who wants to play war?" is a regular refrain in the poetry) but they're then the ones who have to step up and pick up the pieces afterwards. 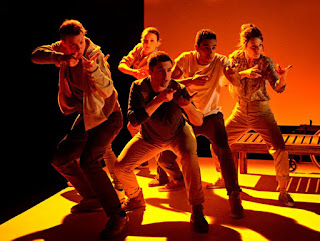 It does mean we don't see any acknowledgement of the fact that women also have a front-line role to play; I also thought Sheers might have gone for a slightly more complex resolution to Arthur's story than he does, while a couple of particularly dramatic moments tend a bit towards cheesiness. These are my only minor criticisms though, of a powerful piece that gives an intimate touch to a huge subject, with a powerful central performance from the promising Dunster.

Pink Mist by Owen Sheers is booking until the 13th of February at the Bush Theatre.

NB production photos are from the original run at the Bristol Old Vic, in which Rebecca Killick did not appear.
Posted by nick730 at 22:59