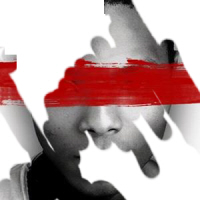 Chris Urch had a miner hit* with Land of Our Fathers, which will be getting another London run later this year, and in the meantime another of his plays gets a further life (having originally played in Manchester after winning the Bruntwood Prize,) as Ellen McDougall directs Urch's look at a very different subject. The Rolling Stone takes its title from a Ugandan newspaper that takes particular glee in the country's anti-gay laws: Notoriously, it publishes the names, addresses and photos of homosexuals with the intention that they be arrested or, just as likely, lynched. It's a poisonous environment to set a gay love story, in which 18-year-old Dembe (Fiston Barek) meets Ugandan-Irish doctor Sam (Julian Moore-Cook,) and the couple start a surprisingly laid-back relationship. When Dembe's father dies, his older brother Joe (Sule Rimi) is elected pastor of their church, but not unanimously - those who object to such a young pastor will keep a particularly close eye on Joe and his family.

It takes a while to buy into Dembe and Sam's relationship, although that's partly because one of its defining characteristics is that the two are never quite sure where they stand with each other. 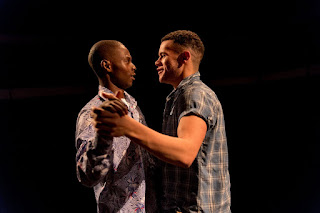 But then a lot of Urch's play comes down to the difficulty of defining what love is, and how different people see it: Dembe and Sam both have doubts about their relationship because each of them suspects the other doesn't love him in the same way he does, while Dembe's twin sister Wummie (Faith Omole) has sacrificed so much for love of her family she feels she has a monopoly on it. And there's also a loving platonic friendship, that might be the most genuine relationship we see in the whole show, between Dembe and the girl he's expected to marry, Naome (Faith Alabi,) mute daughter of their manipulative neighbour (Jo Martin.) 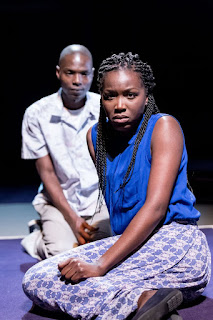 Of course overshadowing everything else going on in the play is the threat of the Rolling Stone outing someone, and the modern-day witch-hunt that could see anyone accused if they get on the wrong side of the wrong person (one plot twist in particular drew real audience gasps this afternoon.) It's an extreme context for a story that otherwise touches on a conflict between a young man's new path in life and his existing loyalty to faith and family, that's been tackled in many other works. 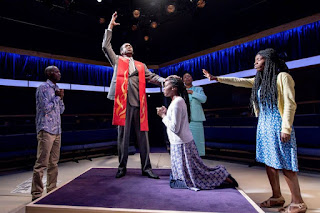 But if the arguments we see aren't exactly unique they're presented well with some committed performances, particularly from an intense Barek. The play doesn't allow its dark subject matter to draw it entirely into bleakness, and there's plenty of light or sweet moments, and characters to sympathise with among the religiously-sanctioned hate; but The Rolling Stone also inarguably builds up a grippingly tense atmosphere as its events start to spiral out of control.

The Rolling Stone by Chris Urch is booking until the 20th of February at the Orange Tree Theatre.