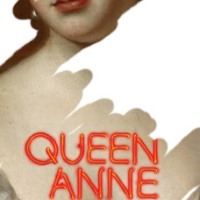 It'd be a bit optimistic to think it signals 2016 sorting out theatre's notorious gender imbalance, but I've started the year with a trio of plays centring on women. The third is Queen Anne, Helen Edmundson's attempt to restore the memory of a largely forgotten monarch, whose name nowadays is mostly likely to be followed by that of a piece of furniture. The last of the Stuarts, even before her reign began its central issue was the succession, and England was determined enough to avoid another Catholic king to spend years and a fortune on wars in Europe to prevent it. When her predecessor William III (Carl Prekopp) dies earlier than expected, Anne (Emma Cunniffe) has been unable to provide herself with a living heir, and the seventeen pregnancies she's had while trying have left her physically and mentally exhausted. But she still embraces her new responsibilities, determined to be remembered as England's fairest ruler*.

She is, however, easily influenced, so there's much jockeying for power, and in pole position is the family of the Duke of Marlborough, John Churchill (Robert Cavanah,) whose wife Sarah (Natascha McElhone) has been Anne's closest friend for years. 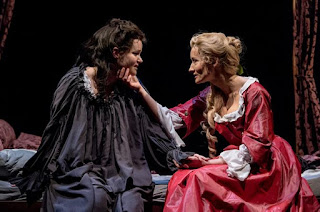 After Anne's death, Sarah's memoirs claimed she'd actually always found the Queen tedious, and Edmundson's take on the two women's relationship similarly paints it as one-sided: Anne dotes on Sarah who, in turn, treats her as simply a means to an end, and in her crueler moments suggests behind her back that the Queen's feelings towards her aren't strictly platonic. Sarah gains huge power in the royal household while her husband takes over the military, but a rival to their influence is the Speaker of the House of Commons, Robert Harley (Jonathan Broadbent.) 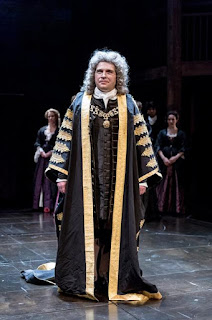 The unlikely key to the power struggle is Anne's chambermaid Abigail (Beth Park,) who's related to both Sarah and Harley. Much of the play focuses on these behind-the-scenes machinations but Edmundson has also honed in on another new factor of the time - freedom of speech laws saw the rise of satirists, and the play is punctuated with musical interludes, the cast (usually led by Daniel Easton and Jenny Rainsford) singing often viciously cruel songs about the Queen and whoever they think is currently pulling her strings. 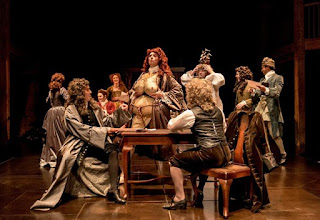 Although the play could probably do with being slightly shorter, these songs do break up Natalie Abrahami's production and stop it from actually feeling overlong. It helps that Cunniffe gives a compelling central performance, Anne's essential kindness shining through even as her willingness to be influenced becomes frustrating. McElhone plays Sarah a bit too straightforwardly devious for my liking, although once she falls out of favour there's a suggestion that she realises she did, after all, like more than just the influence she got from her time with the Queen. 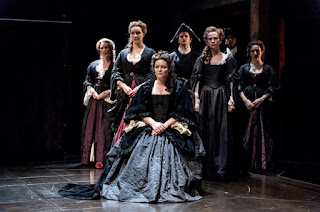 Meanwhile the achievement Anne herself thought the greatest of her reign, the full creation of the United Kingdom, is quickly dismissed by those vying for their own interests. Another interesting history from Edmundson, and a reminder that politicians' place in history isn't always as assured as they might think - many of the characters believe they'll be remembered as the true great of their era, but in fact even the era itself is now largely ignored.

Queen Anne by Helen Edmundson is booking in repertory until the 23rd of January at the Swan Theatre, Stratford-upon-Avon.