Theatre review: Lord of the Flies 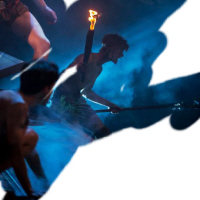 Nigel Williams' adaptation of William Golding's Lord of the Flies premiered a couple of summers ago at the Regent's Park Open Air Theatre to great acclaim, but for various reasons I'm not crazy about seeing stuff there so I stayed away. Timothy Sheader's production has now been restaged (by Liam Steel) for a national tour though; it's about halfway through its run now, and I caught it on its Richmond leg. The World War II setting of the novel has been updated to the present day but Williams' adaptation imagines a new evacuation of children, with a number of boys, few of whom knew each other beforehand, being flown away from a war. But their plane crashes on a deserted island killing all the adult chaperones, and the surviving boys try to organise themselves, quickly electing the no-nonsense Ralph (Luke Ward-Wilkinson) as leader, with a plan to maintain a fire and attract rescuers. But Jack (Freddie Watkins,) leader of a public school choir, believes he should be chief, and quickly undermines Ralph's lead.

The choir become the group's hunting party, killing the island's native boar, and their culture of violence soon extends to the whole island regressing to a savage state. 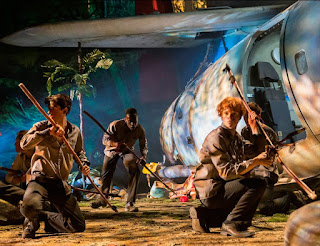 Jon Bausor's set is particularly ambitious for a touring production, with more than a suggestion of Lost in the design conceit as it takes the fuselage of the crashed plane as its main feature. It's inventively used to create the whole island, with the tail wing serving as the mountain where the boys encounter a "beast," parts of the plane being cannibalised to create shelter, and in a particularly cruel little touch, Jack's gang using the oxygen masks to tie up prisoners. The move from outdoors to an old-fashioned proscenium arch does sometimes leave the set looking cramped but it's undoubtedly a highlight of the production. 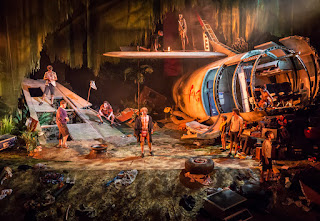 With the present-day setting, Williams has also added a reference to the current ruling class as the various boys first meet, with a notable variety in their backgrounds: Jack's choir are the ones who definitely come from an exclusive public school, and instead of his weight, the initial reason Piggy (Anthony Roberts) gets bullied is his northern accent and "inferior" education. The whole descent into savagery comes down to Ralph being elected leader when Jack absolutely believes he's entitled to the role himself; Watkins' Jack remains a petulant, increasingly deranged child, the real cruelty coming from his lieutenants Bill (Yossi Goodlink) and especially Roger (Matthew Castle.) 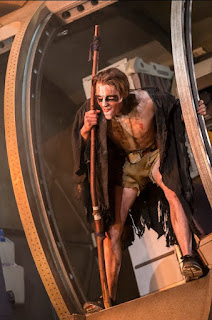 There's always something odd for me in seeing an adaptation of a book I did for O'Level English and therefore spent far too much time looking into its themes and symbolism, and certainly the idea of the epileptic Simon (Keenan Munn-Francis) as a too-good-for-this-cruel-world Christ figure feels a bit heavy-handed here. But I liked the characterisation of Ralph as less of a Marty Stu, starting out as likely to bully Piggy as any of the other boys and very quickly losing control; in fact this version makes him clearly a figurehead leader, with Piggy the practical one who actually comes up with the ideas, Ralph simply the more charismatic one the other boys are more likely to listen to. 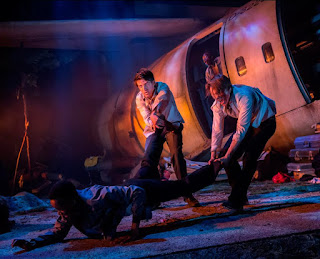 With a young, or at least young-looking cast (according to the website Ward-Wilkinson is 22, so the rest of the cast are probably similar ages playing much younger) there's a bit of a mix of abilities among the actors, but Sheader's production is strongest in its ensemble and movement work, and Williams effectively compresses the novel's action into an oppressive couple of hours. True to the original but with a more contemporary touch, Lord of the Flies is a high-quality addition to the touring circuit, and one that kept the many school parties in tonight's audience in quiet concentration throughout (in fact I heard some kids on the way out talking about how much better they thought it was than the book.)

Lord of the Flies by Nigel Williams, based on the book by William Golding, is booking until the 23rd of January at Richmond Theatre; then continuing on tour to Guildford, Liverpool, Leicester, Coventry, Bradford, Newcastle and Bromley. Running time: