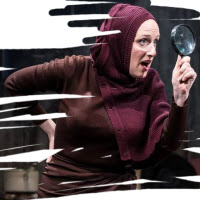 One of my last shows of 2015 was The Dazzle, a story based on a real-life pair of wealthy, reclusive hoarders, and I kick off 2016 with another one, this time in musical form. Edith Bouvier Beale was the aunt of Jacqueline Kennedy Onassis, who in the 1970s found notoriety when she and her daughter were found living in a dilapidated mansion filled with junk and cats. Named after the house where the two holed themselves up for decades, Doug Wright (book,) Scott Frankel (music) and Michael Korie's (lyrics) Grey Gardens looks at how a family of Hamptons socialites turned into crazy cat ladies, by taking us back to 1941: Edith (Jenna Russell) is organising an engagement party for her daughter Little Edie (Rachel Anne Rayham,) and putting herself at the centre of it with a plan to perform a number of songs. Little Edie has landed a Kennedy of her own, JFK's older brother Joseph Jr* (Aaron Sidwell,) but when her mother realises she'll end up alone, she sabotages the engagement.

It succeeds, and Little Edie leaves Grey Gardens vowing never to return but by the second act it's 1973 and, losing her sanity, she's back and trying to keep the rest of the world out. 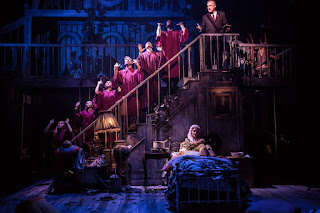 So Grey Gardens really is a game of two halves, the second act based on the cult documentary about the Beales that inspired the play, the first a much livelier affair as we see Edith with the crowd she's surrounded herself with - as well as Little Edie there's Edith's father (Billy Boyle,) butler Brooks (Ako Mitchell) and even in-house pianist Gould (Jeremy Legat) - while the approaching engagement party will provide her with an audience for her theatrical side. But there's already signs that this won't last forever, and her husband is notable by his absence. It's an entertaining, fairly traditional piece of musical theatre with a well-realised underside of pain. 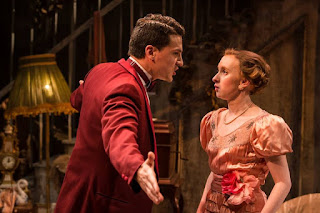 The 1973-set second act is the more ambitious, with mixed results, as Sheila Hancock takes over the role of the now almost bedridden Edith, and Jenna Russell becomes Little Edie. I couldn't dismiss an uncomfortable feeling that the show is playing mental illness for laughs, but this is salvaged by Russell's extraordinary comic performance, beginning with the spectacular Act II opener "The Revolutionary Costume For Today" which introduces Little Edie's new, wilfully eccentric dress sense (costumes by Jonathan Lipman.) Russell immediately establishes her new character as well as how drastically that character has changed, and in the process sets the bar for the year's best comic performance. Also impressing with his range is Sidwell, who after the prim and upstanding Kennedy returns as good-natured stoner Jerry, who pops in to check up on the women and tidies after Little Edie when she's not looking. 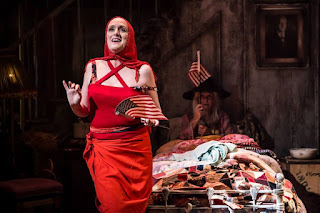 This less traditional second act may not balance the comic and tragic as well as the first does, the transitions between tones a bit more jarring here, but Frankel's music remains strong and entertaining, with a surprisingly large band hidden away behind the dusty walls (although as with most musicals, the sound balance favours them too much, sometimes drowning out the voices.) Thom Southerland, by now the absolute authority on putting on big musicals at Southwark Playhouse, gives the show as strong a production as it could wish for, Tom Rogers' extravagant wooden set looking like it might have a transfer to somewhere bigger in mind. Whether that comes about or not, in the meantime while the awkward structure of the second act leaves the show feeling flawed, it's still well worth catching if only to see Russell's odd but compelling and memorable performance up close.

Grey Gardens by Doug Wright, Scott Frankel and Michael Korie, based on the film by David Maysles, Albert Maysles, Ellen Hovde, Muffie Mayer and Susan Froemke, is booking until the 6th of February at Southwark Playhouse's Large Theatre (at time of writing most dates are sold out but there are a few still available.)

*apparently in reality Kennedy was a passing acquaintance, and Little Edie's claims that if he hadn't died in the war she might have been First Lady a fantasy; but for the purposes of the story Wright's book treats it as fact
Posted by nick730 at 23:14