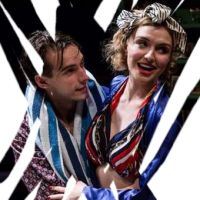 French Without Tears made number 6 in my favourite plays of last year (you can read my original review here,) so it wasn't a hard choice to make another trip to Rattigan's early comedy of young men learning French in hopes of entering "The Diplomatic." Paul Miller's production has returned to the Orange Tree for a month prior to a national tour. Only two of the original cast members have returned - Joe Eyre as the smitten Kit and David Whitworth as the quietly grumpy teacher Monsieur Maingot - and the new actors bring slightly different characterisations to their roles, but the light feel and well-executed comedy are unaffected. Florence Roberts, for example, is a somewhat crueller Diana than Genevieve Gaunt was, taking obvious pleasure in breaking the hearts of the young boys while plotting to find the most suitable husband material among them.

Ziggy Heath, by contrast, makes Alan less of a manipulator and more of an observer and obvious author-substitute, while Alex Large gets the laughs from the most broadly comic character, Brian, by playing up his dimness and fondness for prostitutes more than his inept French. 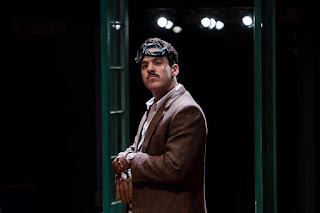 Alistair Toovey is sweet as Babe, if anything more obviously, quietly in love with Alan than ever, and Beatriz Romilly particularly good as Jacqueline, Maingot's daughter and the understated contrast to the brash Diana. There's something a bit one-note about Tim Delap's braying as the naval officer Bill, but the joke manages to keep working throughout the play's duration. With the world's news currently being anything but funny - given the play's setting, this weekend's performances were dedicated to the victims of the Nice attacks - something light and funny will always be welcome, and French Without Tears delivers just as well now as it did last year: Don't miss it if it tours near you.

French Without Tears by Terence Rattigan is booking until the 30th of July at the Orange Tree Theatre; then continuing on tour to Exeter, Harrogate, Barstaple, Cheltenham, Doncaster, Coventry, Poole and Huddersfield.