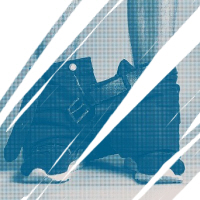 I'm pretty sure Paines Plough hate London audiences and don't want them to see their shows - I can't see any other reason for setting up the only London dates of their new Roundabout tour in a well-hidden corner of Hackney 20 minutes' walk from the nearest tube station. Indeed, they succeeded in keeping people away from the final London performance of Growth, which is a shame as Luke Norris' new play works well even with a small turnout, but I think could have really captured the attention of a full house. Norris' first play looked at the health issues of an older man, but now he looks at those of someone a lot closer to his own age. Andy Rush plays Tobes, who loses his job, his girlfriend and his flat in the course of a few weeks. But all his frustrations end up focusing on something else he's about to lose.

Following the breakup, he hooks up with a Tinder date who points out a lump on his left testicle that he's been ignoring for nearly two years. He's finally motivated to have it checked out, and finds out the doctors can't determine if it's malignant or not without first removing the bollock.

Both Norris' play and George Perrin's production go for quite a simple but formal style - Remy Beasley and Richard Corgan play every other character we meet, and apart from one scene they're all one-to-one with Tobes, with no other character appearing twice. They deliberately avoid making much distinction between the characters, but this lends the narrative pace, as the play continually sees the central character go to a succession of people looking for help, but not getting it because what he really needs is to grow up himself. 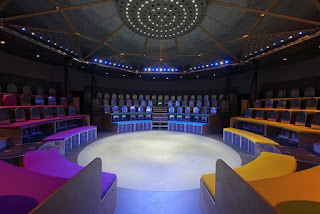 Rush is great casting for this as he's got the combination of grumpy self-pity and stubbornness, with a likeability that makes us want to keep following the character; the other two spark off him well too, managing the difficult task of creating a couple of dozen different characters without overtly changing their voices or mannerisms.

The play is touring in repertory with two other plays with the same cast (unfortunately the awkward schedule meant I could only catch this one,) in a new, more permanent version of the Roundabout touring stage that did the rounds in 2012. It's a bit more of a high-tech space now, with metal seat backs and a built-in lighting rig that looks like a flying saucer, but it's kept the blue, yellow and pink theme of Richard Wilson's cushions from the old wooden venue. It means it doesn't come across as quite a clinical space at it might first look, and the warmth of the cast in Perrin's simple production make it feel less like a game show studio, more like a suitable space for a character to face up to his demons in a witty, sometimes darkly funny (the line about the single orchid on the coffin is great) play that'll hopefully find its audience as it tours.